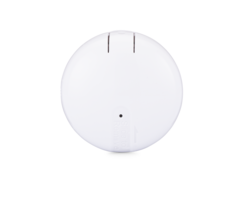 The 2GIG FF1e-345 is an encrypted smoke detector and CO detector listening module exclusively for use with the 2GIG GC2e and 2GIG GC3e. The module activates upon hearing the Temporal 3 (T3) or Temporal 4 (T4) sound of a triggered life-safety sensor. Buy the 2GIG FF1e-345 from Alarm Grid.

The 2GIG FF1e-345 is an encrypted listening module that allows you to integrate otherwise incompatible smoke detectors and carbon monoxide sensors with your 2GIG GC2e or 2GIG GC3e System. The pairing detector unit must emit a Temporal 3 (T3) or Temporal 4 (T4) sound to activate the FF1e-345.

Also known as the encrypted FireFighter, the 2GIG FF1e-345 should be installed within six (6) inches of an existing smoke detector or carbon monoxide sensor. The speaker on the FF1e-345 unit should be facing the sounder of the detector it is being used with. The FF1e-345 is most commonly used with wired smoke detectors and wired CO detectors that would otherwise have no way of interfacing with a 2GIG GC2e or GC3e System. It may also be used with conventional battery powered smoke detectors and CO detectors that you can buy at most hardware stores. The only requirement is that the paired device is able to emit a Temporal 3 (T3) sound for smoke and fire detection, or a Temporal 4 (T4) sound for carbon monoxide detection. The 2GIG FF1e-345 is dependent upon hearing the T3 or T4 sound.

This is an encrypted sensor that can be considered as a member of the 2GIG eSeries Lineup. It will not work with the non-encrypted 2GIG Systems. Nor will it work with most other 345 MHz panels, such as those from Honeywell or Qolsys. It is for the 2GIG GC2e and GC3e only. There is a non-encrypted version of the same device called the Encore FireFighter FF345 which has a wider scope of compatibility than this encrypted version. The advantage to using this encrypted model is that it is not prone to certain hacking and takeover attempts that can disrupt non-encrypted sensors. Just remember that you must have a compatible system to use the FF1e-345. Please note that this sensor has two (2) available Serial Numbers. One is used for smoke detection, and the other is used for CO detection.

When programming the 2GIG FF1e-345, you can set it up using the same settings that you would use for any otherwise normally compatible smoke detector or CO detector. Smoke and CO detectors are considered life-safety sensors, so an activation on the FF1e-345 will always trigger an alarm upon activation. If your system is monitored with central station service, then you can receive automatic emergency dispatch once the device is activated. Make sure to check with your local jurisdiction to see if automatic emergency fire dispatch is permitted in your area. Also remember to test the 2GIG FF1e-345 after installing and programming. This is done by activating the smoke detector or CO sensor and making sure that the FF1e-345 triggers an alarm on your system. Always put your system on test mode before doing this if you have central station monitoring service.

Note: This product may also be sold as the Encore FF1e-345.