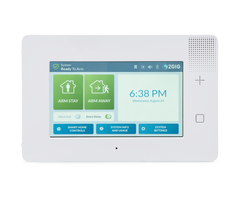 The GC3e is the most advanced alarm system from 2GIG. It supports great features like encrypted sensors, easy upgrading, Smart Areas for partitioning, and Z-Wave Plus technology. This is a phenomenal system for your alarm monitoring and smart home needs. Buy the 2GIG GC3e from Alarm Grid.

Users looking for a reliable and complete security system have the solution they need with the 2GIG GC3e. This robust and powerful system has everything you could want in a panel. With encrypted sensor support, partitioning, Z-Wave Plus, and Alarm.com access, the GC3e is the total package.

Through the years, 2GIG from Nortek has continued to wow the security industry with some of the finest panels on the market. The 2GIG Go!Control GC2 proved that you didn't need a Honeywell Panel for a trustworthy and reliable security solution. Then the 2GIG GC3 came along and improved upon that system in virtually every aspect. Fast-forward to now, and 2GIG has blown us away once again with their GC3e System. This is without a doubt a superb upgrade to the GC3, and we are sure that users will love the system.

Anyone who uses the 2GIG GC3e will immediately notice the familiar layout and menu options that have been carried over from the GC3. But the system's refreshed look and crisp, modern design will provide satisfaction for any user. The GC3e Panel also brings some new features to the table. This includes support for 2GIG's all-new encrypted sensors that are designed exclusively for use with 2GIG encrypted systems. Only the 2GIG GC3e and its little brother, the 2GIG GC2e, can support these sensors. And the 2GIG GC3e is also backwards compatible with the old 2GIG 345 MHz Sensors and the Honeywell 5800 Series Sensors.

The 2GIG GC3e is also no slouch when it comes to smart home automation. The system has a built-in Z-Wave Plus 500-Series Controller to provide full support for all the great Z-Wave Plus devices out there. By using Z-Wave Plus devices, users will enjoy extended range and battery life with their smart home devices. Whether you want to add smart lights, a smart lock, a smart thermostat, a smart garage door controller, or all of the above, the GC3e is the system for you. It allows for smart home control right from its beautiful 7" touchscreen or from Alarm.com with an appropriate alarm monitoring plan.

To get the most out of your 2GIG GC3e Panel, you will definitely want to obtain an Alarm.com LTE Cellular Communicator. This is the best communication path available for the 2GIG GC3e System. And with the system's built-in WIFI card, an added LTE communicator will facilitate dual-path connectivity for optimal quickness and reliability. The system offers support for AT&T LTE and Verizon LTE Communicators. You should choose whichever service works better in your area. Remember that a compatible monitoring plan is needed to activate the communicator and use remote services through Alarm.com. More information is available on our alarm monitoring page. Connecting with Alarm.com will also allow a convenient 5-day weather forecast to be displayed on the 7" touchscreen.

2GIG Smart Areas is another fantastic feature for the 2GIG GC3e. This allows the panel to operate as a fully partitioned system where you can section off various zones into different groups. This is great for use in offices, multi-family homes, guest homes. and rental properties. Up to four (4) distinct Smart Areas can be established with the GC3e. Each Smart Area can be provided with its own set of access codes, and zones within Smart Areas can still be individually bypassed when needed. This is truly an excellent function for the GC3e, and we are sure that it will prove useful in many situations.

As a system, the GC3e supports up to 100 wireless zones, two (2) on-board hardwired zones, 32 keyfobs, eight (8) keypads (2GIG SP1, 2GIG SP2, and/or 2GIG PAD1-345), four (4) Smart Area partitions, two open collector outputs, a wired bell output, and support for up to 100 user codes. The system uses a 14VDC 1.7A transformer that comes included with the panel. Cabling does not come included, so we recommend purchasing a Honeywell LT-Cable to accompany the panel. Firmware updates can be pushed over-the-air (OTA) from Alarm.com, or you can apply them locally using a USB drive.