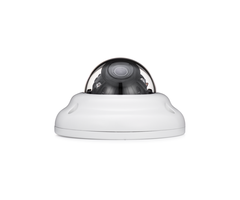 Users looking for an effective and reliable outdoor dome camera can achieve great results with the Alarm.com ADC-V821. The device is designed specifically for outdoor recording. It features an IP66 waterproof rating to protect it from the elements, and it captures video in HD quality.

The ADC-V821 is known for its compact and discreet design that helps it remain rather unobtrusive. The camera is suitable for both residential and commercial use, and its vandal-resistant exterior casing prevents it from being tampered with by outsiders. It can withstand harsh elements like rain, snow, wind, heavy sunlight and dust without issue, ensuring the users always obtain the footage they need. Though made for outdoor recording, it can also be used indoors.

With its IR night vision, the ADC-V821 will capture top-quality video in the darkest environments and settings. The device can receive power from a hardwired ethernet connection thanks to Power Over Ethernet (PoE) technology. For situations where the existing network equipment doesn't support PoE, a separate eight (8) foot power adapter also comes included. For users who would like to take advantage of the PoE feature, but who do not have a router or switch that suppors this feature a PoE Injector can be used. Please note, this camera does not support a WIFI connection to the network. An ethernet cable is required and is not included. All the other necessary mounting hardware for installation is supplied.

The Alarm.com ADC-V821 is an outdoor 720p mini dome camera for use with the Alarm.com platform. The camera is largely outclassed in every possible aspect by the ADC-VC826, and we will almost always recommend purchasing that camera over the ADC-V821. If you have an existing ADC-V821 Camera, then it will still work just fine. But you should be aware that there are newer, more advanced camera options available. While the ADC-V821 is a very good camera, it is not one we would recommend, simply because the ADC-VC826 is better across the board. For that reason, we give the ADC-V821 a 4-Star rating.

There are positive aspects to the ADC-V821. The camera features a small and compact design. In fact, it is slightly smaller than the ADC-VC826, which is the one advantage the ADC-V821 has over that camera. The ADC-V821 can utilize Power over Ethernet (PoE), which makes it easy to provide power to the device. If you do not want to use PoE, then you can use the camera's included 8-foot power adapter. However, you will still need to connect an ethernet cable to the camera anyway for network connectivity. Remember, you can always add a PoE injector if your IP router does not support PoE. One other aspect we like about the ADC-V821 is its weather-resistant design. The camera features an IP66 waterproof rating to keep out rain and moisture.

The ADC-V821 is a good camera, but it is outclassed by the ADC-VC826 in almost every category, including price. If you already have an ADC-V821, then we aren't saying to go out of your way to replace it. But if you are in the market for a new camera, we strongly recommend checking out the ADC-VC826 first. As for the ADC-V821, we give it 4 Stars.