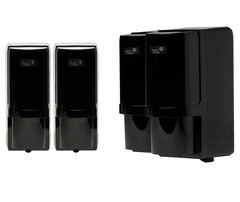 The DSC PG9200AX is a set of PowerG wireless photoelectric beams. With a coverage area of 200' (60.9m) the PG9200AX is perfect for protecting outdoor perimeter areas such as fence lines, gates, parking lots, and driveway entrances. These wireless photoelectric beams are a snap to set up and can protect areas up to 4,000' (1219m) away from the main panel without a repeater. Buy the DSC PG9200AX from Alarm Grid today!

DSC now offers the PG9200AX PowerG wireless photoelectric beams. With a coverage area of 200' (60m) the PG9200AX is perfect for protecting outdoor perimeter areas such as fence lines, gates, parking lots, and driveway entrances. With PowerG technology built in, these wireless photoelectric beams are a snap to set up and can protect perimeter areas up to 4,000' (1219m) away from the main panel without using a repeater.

With a repeater added, the transmitting range of the PG9200AX can be doubled up to a staggering 8,000' (2438m). That's well over a mile. You'd be hard pressed to beat that range, even with a set of wired photo beams. But wireless range isn't the only great feature of the PG9200AX. It also works hard to conserve battery life, and since photoelectric beams consist of both a powered transmitter and a powered receiver, this is particularly important in the PG9200AX. The beams are powered by four (4) LSH-20 batteries which are manufactured by SAFT. The transmitter and the receiver will take two (2) batteries each. The transmitter has a battery life of approximately three (3) years when used with the recommended batteries. The receiver battery life is approximately five (5) years. Using non-recommended batteries may affect the life expectancy of the batteries.

The DSC PG9200AX is a dual-beam device. The transmitter and receiver can be installed up to 200' (60m) apart. When an intruder walks between the transmitter and receiver, they break the infrared beams. When the receiver can no longer see both beams from the transmitter it will indicate a fault or alarm condition, depending on whether or not the alarm panel is armed. Beams can be used for everything from a driveway sensor, to let you know when someone pulls onto your property, to a perimeter alarm to let you know when unexpected visitors cross your property line.

The DSC PG9200AX comes with hardware for either flat mounting, such as to a 4x4 or 4x6 wooden fence post, or a pole-mount, with two (2) U-brackets and screws for each piece. Be sure whatever surface you choose to mount the devices to, that it is steady and will not move, as this will likely result in false alarms. The PG9200AX is compatible with the DSC PowerSeries NEO (V1.37+), the PowerSeries Pro (V1.31+), the IQ2+ (V2.6.2+), the IQ Hub (V3.0.1), and the IQ Panel 4 (v4.0.1+). When enrolling with the panel, both the transmitter and the receiver will be enrolled. The order of enrollment does not matter. Be sure to complete enrollment before mounting both devices. After enrollment, turn the PowerG switch inside both the transmitter and the receiver to OFF, and remove the batteries to prepare for mounting.

There are four (4) channel settings that can be used when multiple sets of beams are installed in close proximity to one another. For example, you may have a beam transmitter mounted on one side of a fence post pointing East, while you have a second beam transmitter mounted on the opposite side of the same fence post, pointing West. In this case, if both sets of beams are using the same channel, crosstalk can occur. In this case, the first set of beams can use Channel 1, while the second set of beams can use Channel 3. Per the User Guide, it is always recommended to switch frequencies two (2) channels apart when devices are stacked in this manner. Always make sure that the transmitter and receiver in a pair of beams are set to the same channel.

Once the PG9200AX receiver and transmitter have been mounted, and the channel selectors have been set properly, they will need to be aligned. There are horizontal and vertical adjustment dials and a viewfinder with instructions on how to carry out proper alignment. The Alarm LED on the receiver will assist you with this process. Once the Alarm LED indicates basic alignment, use the monitor jack for final alignment. The monitor jack is a connection point available on the receiver. When you are facing the receiver, the left jack is for a negative meter lead, and the right jack is for a positive meter lead. Set the meter to read Volts DC, and a 10 VDC scale is sufficient. Then make fine adjustments on the transmitter using the proper horizontal and vertical adjustment dials. When the monitor jack output shows 2VDC or more (2.5+ VDC is optimal) then the beams are properly aligned. The adjustment process is much easier with two (2) people, one at each device.

Once everything is properly mounted and aligned, and functional testing has been completed, the battery-saving timer should be enabled. To easily test the device, be sure this feature is turned off during testing. The battery-saving timer is basically a high-traffic lockout feature. On the receiver, this is enabled and disabled using Dipswitch 3, on the transmitter, it uses Dipswitch 1. With the dipswitch handle toward the number, the switch, and the feature, is ON. If the switch is toggled away from the number then it is OFF. When the battery-saving timer is on, the alarm output has a lockout of two (2) minutes, the DQ output has a lockout of two (2) minutes, and the low battery output has a lockout of 15 minutes. This means that for each of these events, the device will only transmit one (1) time per timer duration. For example, when an alarm occurs, the PG9200AX will transmit an alarm, then it will not transmit again for two (2) minutes, regardless of how many times the beams may have been activated. In order for the battery-saving timer to be active, the cover for each device must be properly and securely attached. There is no battery-saving feature for the cover tamper.

The DSC PG9200AX has a disqualification (DQ) output, which can be configured to send a separate signal to the panel to alert that environmental conditions are likely affecting the beams. This could be heavy rain, snow, fog, or even falling leaves. Alternatively, the DQ output can be configured to bypass the alarm from the PG9200AX when triggered. This option is programmed using a jumper on the Receiver. Refer to page 22 of the User Guide linked above for the proper DQ output setting options.