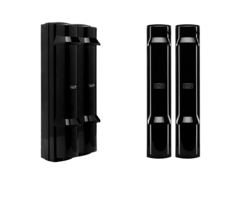 The DSC PG9350SL PowerG wireless photoelectric beams offer a quad beam configuration with a 350' (106m) detection range. Their range makes them an excellent means of protecting large outdoor areas such as car lots, heavy equipment storage areas, large warehouses, and even farming operations. With their PowerG capabilities, they have a transmitting range of up to 4000' (1219m) without a repeater. Buy the DSC PG9350SL from Alarm Grid!

The DSC PG9350SL PowerG wireless photoelectric beams offer a quad beam configuration with a 350' (106m) detection range. Their range makes them an excellent means of protecting large outdoor areas such as car lots, heavy equipment storage areas, large warehouses, and even farming operations. With their PowerG capabilities, they have a transmitting range of up to 4000' (1219m) without a repeater.

If you need to use the PG9350SL Photoelectric Beams more than 4,000' (106m) from the location of the alarm panel, then adding a PowerG repeater can effectively double the transmitting range of the beams. This gives the PG9350SL a transmitting range of well over a mile! Most wired sensors would be hard-pressed to beat that kind of installation flexibility and range. Alarm Grid is selling the DSC PG9350SL in quantities of two (2) sets of beams per order. That means when you purchase this product, you are receiving two (2) transmitters and two (2) receivers. Each pair of photo beams requires four (4) LSH-20 batteries manufactured by SAFT. A full set of batteries is included with each pair. Battery life expectancy for each transmitter is approximately four (4) years, and for each receiver is approximately five (years) when the proper batteries are used. The use of any other battery may cause unpredictable battery life expectancy.

The DSC PG9350SL is a quad photoelectric beam. That means that each transmitter is sending four infrared beams to its corresponding receiver. When a person or vehicle passes between the transmitter and the receiver, it breaks these beams, and this causes the receiver to transmit a fault signal to the alarm panel. This can cause an alarm, trouble, or other indication, depending on the armed state of the panel, and the response type programmed for the beam zone. Each transmitter and receiver can be mounted up to 350' (100m) apart. Proper alignment between the transmitter and receiver is very important, as, without it, false alarms will occur. For this reason, each piece needs to be mounted to a stable surface that won't move with the wind, or when brushed against by people or animals. The DSC PG9350SL can be used inside or outside.

Mounting hardware for either a flat surface mount or a pole mount is included with each DSC PG9350SL. Both the transmitter and the receiver for each pair of beams will be enrolled with the alarm panel. Programming should be completed prior to physically mounting the devices. The transmitter and receiver can be enrolled in any order. Once enrolled, the PowerG switch should be set to OFF, and the batteries removed from both parts. With the batteries installed, you won't be able to reach the area of each piece where the screws are inserted. Once mounting has been completed, the batteries can be reinserted, and the PowerG switch set back to the ON position. The alarm panels that support the PG9350SL are the PowerSeries NEO (V1.37+), the PowerSeries Pro (V1.31+), the IQ2+ (V2.6.2+), the IQ Hub (V3.0.1+), and the IQ Panel 4 (V4.0.1+). Refer to each panel's installation instructions for information on adding PowerG sensors.

As photoelectric beams can be used to protect fence lines, it is often the case that multiple sets of beams can be installed in close proximity to one another. In this case, there are four (4) available channel settings on the PG9350SL. An example would be mounting the transmitter for one set of beams to a post and pointing it West while mounting the transmitter for the second set of beams to the same post and pointing it East. In this case, if both beams are using the same channel, there is a good chance they may get their signals crossed. In this case, the West Set can use Channel 1, while the East Set can use Channel 3. Per the User Guide, it is always recommended to skip at least two (2) channels when stacking beams. It is a good idea to read the full User Guide in preparation for installing the DSC PG9350SL.

After enrollment, physical installation, and channel selection comes beam alignment. There are both horizontal and vertical adjustments to be made. The installer can use their hands to provide a basic alignment, making sure not to touch the lenses on the transmitter. Then, each transmitter has a fine adjustment dial for horizontal and vertical fine-tuning. Proper alignment is more easily performed with two (2) people, one person at the transmitter making adjustments, and one person at the receiver verifying the readings using the viewfinder, the alarm LED, and the monitor jack.

Once the rough and fine adjustments have been made, the PG9350SL has a feature called the monitor jack. This is a positive (+) and negative (-) connection point located on the receiver. Connect a voltmeter or multimeter's positive lead to the positive monitor jack, and the meter's negative lead to the negative monitor jack. Set the meter to measure Volts DC. A 5 or 10 scale is adequate. Continue to use the fine adjustment dials on the transmitter until the voltmeter reads about 2.8Volts DC or more. This indicates an excellent alignment level. A reading of 2.4Volts DC or higher is considered the minimum acceptable reading. Once alignment is completed, walk test each pair of beams to be sure they are working properly. Do this prior to enabling the battery-saving timer.

The battery-saving timer is a high-traffic inhibit feature. On the receiver and the transmitter, this is enabled and disabled using Dipswitch 3. With the dipswitch handle toward the number, the switch, and the feature, is OFF. If the switch is toggled away from the number then it is ON. When the battery-saving timer is on, the alarm output has a lockout of one (1) minute, the DQ output has a lockout of one (1) minute, and the low battery output has a lockout of five (5) minutes. This means that for each of these events, the device will only transmit one (1) time per timer duration. For example, when an alarm occurs, the PG9350SL will transmit an alarm, then it will not transmit again for one (1) minute, regardless of how many times the beams may have been activated in that time. In order for the battery-saving timer to be active, the cover for each device must be properly and securely attached. There is no battery-saving feature for a cover tamper.


The DSC PG9350SL has a disqualification (DQ) circuit, which can be configured to send a separate signal to the panel to alert it that environmental conditions are affecting the beam's accuracy. This could be caused by heavy rain, snow, fog, or fallen leaves. Alternatively, the DQ output can be configured to bypass the alarm signal from the PG9350SL when triggered. This option is programmed using a jumper on the Receiver. Refer to page 23 of the User Guide linked above for the available DQ output setting options.