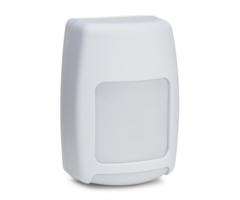 Just like the 5800PIR, the 5800PIR-COM has (3) selectable loops. The first loop is default and provides low sensitivity detection. The second loop provides high sensitivity detection. The third loop is for a low temperature alarm that will trigger when the room is approaching freezing temperatures. If you want to use the second or third loop, you must program them as separate wireless zones within your Honeywell wireless alarm system's zone programming. There is also a built-in tamper loop (loop 4) that will trigger a tamper alarm if the 5800PIR-COM is opened or removed from the wall. To utilize the wall removal tamper, you should install the included mounting screw into the tamper knockout in the rear of the motion detector's plastic cover. If someone tries to remove the 5800PIR-COM from the wall, the knockout will break from the motion detector's cover and the tamper alarm will be triggered.

You can even paint the cover of the Honeywell 5800PIR-COM motion detector to match the decor of your commercial space.