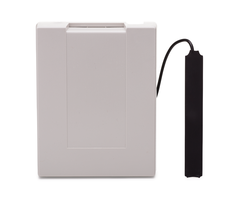 The Networx NX-592E-GSM-ZX-RG is a cellular communicator that will access the 3G Rogers cellular network. Adding this device to a compati...

The Networx NX-592E-GSM-ZX-RG is a cellular communicator that will access the 3G Rogers cellular network. Adding this device to a compatible Networx Alarm System will allow the panel to sync with the Alarm.com server. The module also includes a built-in Z-Wave controller for operating Z-Wave devices. However, since 3G networks are expected to be discontinued in the coming years, we advise users to purchase an LTE communicator instead. These communicators will offer faster speeds and a longer product life overall. Alarm Grid offers compatible LTE communicators from AT&T, Verizon and Telus.

It cannot be stressed enough how useful a cellular communicator is for an alarm system. These modules allow a panel to communicate faster and more reliably with a central station and interactive servers. Without a cell communicator, a panel will be forced to rely on telephone service for communication. This is a dated technology that is not recommended for use today. Panels that rely on POTS (plain old telephone service) communicate slowly, and the physical connection can potentially be cut by an intruder. On the other hand, cellular service is both fast and reliable, and it cannot be easily tampered with. This makes it the gold standard for anyone who wants an optimal alarm system.

Using a cellular communicator also allows a panel to sync with the Alarm.com service. Alarm.com is an interactive platform provides users with full access to their alarm system. With Alarm.com, a user can arm and disarm their system, check sensor status and operate their Z-Wave devices. If the user accesses Alarm.com using its official mobile app, they can perform these functions from almost anywhere in the world. Overall, it is an excellent service that allows a user to get the very most out of their alarm system.

Adding a cellular communicator will also provide the panel with Z-Wave functionality. Z-Wave is a type of RF signal that works with certain home automation devices. Some popular types of Z-Wave devices include lights, thermostats and door locks. By using these devices, a user can establish a home automation network that can make their lives more convenient and save them money. A user can also create rules and scenes for their Z-Wave devices so that they activate automatically when specified events occur on the system. For example, a user might have an established Z-Wave scene for when they leave the house. Once they arm away, they could have their system turn off all their Z-Wave lights and turn down the thermostat. Then when they disarm, they might have their lights and their thermostat turn back on.