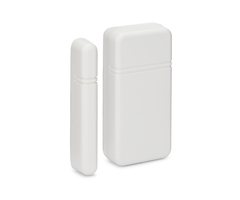 The Qolsys IQ MICRO DW-S QS1132-840 is a discreet surface-mounted door and window sensor. It is compatible with the 319.5 MHz version of the IQ Panel 2 Plus and the wireless Interlogix Alarm Panels. A stronger magnet allows for a maximum spacing gap of one inch. Buy the Qolsys MICRO-S here.

The IQ MICRO DW-S QS1132-840 is a wireless door & window contact sensor built for use with the 319.5 MHz Version of the IQ Panel 2 Plus. It is the smallest contact sensor yet from Qolsys, which ensures a neat and discreet look. End users will have no problem installing this versatile sensor.

As a Qolsys 319.5 MHz S-Line Sensor, the IQ MICRO DW-S will work with virtually any alarm system that accepts the 319.5 MHz wireless frequency. When the sensor is used with the 319.5 MHz IQ Panel 2 Plus or the standard IQ Panel 2, it will utilize rolling code encryption in its wireless communications for added security. The sensor will also work with various Interlogix Panels, including the wireless Simon Series Panels. However, it will only use S-Line rolling code encryption with the compatible IQ2+ and IQ2.

There are many great features that end users will absolutely love about the Qolsys IQ MICRO DW-S. The sensor is incredibly discreet, measuring just 1.83"L x 0.87"W x 0.4"D. This super thin design helps it appear almost invisible when mounted on a door or window frame. It is also perfect for use on medicine cabinets and gun safes if you want to monitor those important enclosures. The sensor features pre-applied adhesive, allowing for a super quick and easy installation.

One of the best additions to the IQ MICRO DW-S is the stronger magnet that comes included. This new magnet is more powerful than the magnets included with older door and window sensors from Qolsys. This stronger magnet allows for a wider spacing gap when installing the sensor. You can have the magnet up to one-inch away from the sensor when the door, window or cabinet is closed. Remember that the sensor should be placed on the door or window frame, while the magnet should be be placed on the moving part of the structure. Remember to test the sensor after installation.

Enrolling the IQ MICRO DW-S is super easy. Simply put your panel into its wireless enrollment mode, and open up the back cover on the sensor to activate its tamper switch. The system should recognize the sensor and ask you if you want to enroll it. From there, you can configure the settings for the zone so that the system responds appropriately when the sensor is faulted. The sensor can communicate with an alarm system from up to 600 feet away in an open air environment, so keep that in mind when planning. The back tamper cover will alert the system if someone tries to open the sensor.

The Qolsys IQ MICRO DW-S uses a 3V lithium CR1632 coin battery for power. This battery comes included with the sensor. The battery will provide power for five (5) years with standard use. The end user can easily replace the battery when a new one is needed. Qolsys recommends using either an Energizer CR1632 or a Duracell DL1632 with the sensor.