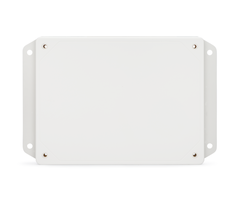 The IQ Hardwire 16-F will work with any wireless alarm system that accepts 319.5 MHz signals. Some of the systems that operate at this frequency include the IQ Panel 2, the IQ Panel 2 Plus with 319.5 MHz daughtercard, the original IQ Panel and the Interlogix Simon Series Panels. If the module is used with the IQ2 or IQ2+, then the signal will utilize rolling code encryption for added security. Otherwise, signals will be sent without rolling code encryption.

There are 16 total hardwired zones on the IQ Hardwire 16-F. Zones 1 thru 15 are for standard hardwired security sensors. This includes devices such as door and window contacts, motion sensors, glass break sensors and more. Normally Open or Normally Closed wiring can be used. Each zone must have a 4.7k resistor wired in parallel (NO) or series (NC). The necessary resistors come included. Note that the 4.7k resistors that come with the module are color-coded Yellow-Violet-Black-Brown-Brown.

Zone 16 is also supervised using a 4.7k resistor and can be wired Normally Open with the resistor in parallel. It is designed specifically for use with 2-wire smoke detectors. Up to ten 2-wire smoke detectors can be wired in parallel through these terminals. The smoke zone supports System Sensor 2W-B, 2WT-B and 2WTA-B models. Different detector models should not be mixed on the same zone. Please note that 4-wire smokes and carbon monoxide sensors cannot be used with the IQ Hardwire 16-F.

For power, the IQ Hardwire 16-F uses a 16.0VDC plug-in transformer. A power cable comes included for connecting the Hardwire 16-F with its plug-in transformer. Note that the wire with the dash marks is the positive (+) wire. It is strongly recommended that a user adds a 12VDC 5AH max backup battery to keep the module running in the event of an electrical outage. A backup battery does not come included with the device. We recommend purchasing an UltraTech 1240 Battery for this job. The IQ Hardwire 16-F comes with a battery harness for connecting the battery.

The IQ Hardwire 16-F also features a 500 mA power output, for devices that require power such as motion detectors and glass break detectors. Also included is an auxiliary relay output rated at 12VDC 500mA which can be used to add an additional siren. This relay is triggered wirelessly by the Qolsys IQ Panel 2, and will follow the alarm panel siren sounding. In addition, the Qolsys Hardwire 16-F has both a negative and positive trigger input, which can be used to activate the siren relay. Additional power may be needed for some external siren applications. The module measures in at 5.5" x 3.5".

Please note that the Qolsys IQ Hardwire 16-F will only serve as a wireless siren relay for an IQ Panel 2 System that is RF PIC Version 11.1.4 G2 or higher. Panels have a lower version cannot be upgraded. The user will need to replace the system with a new one if they want to use the IQ Hardwire 16-F as a wireless siren relay. You can check the RF PIC Version for your IQ Panel 2 by clicking the small grey bar at the top of the main screen. Then choose Settings > Advanced Settings > Installer Code (1111) > About > Hardware > RF PIC Version.

Sophie tardif
November 14, 2019 19:09
Unfortunately, it is not permitted to tie high voltage (110 AC) smoke and CO detectors into a low voltage (DC) system. Are all your units combination Smoke and CO detectors, and if one of them goes off do they all sound? If so, you can use a listening device mounted at one of your existing detectors. It will listen for the sound of the Smoke or CO alarm, and will transmit a wireless signal to the Qolsys Alarm Panel, which will activate an alarm. Do you have existing pre-wired burglary contacts already in place that you wanted to also tie into the Hardwire 16-F? If so, you can still do so. If you don’t mind sending an email to support@alarmgrid.com with some basic information on what you intend to do, one of our system planners will be glad to assist you with choosing the proper system.
SS
November 14, 2019 15:48
We have existing smoke and carbon monoxide monitoring units by First Alert (hard wired with battery backup) throughout a large home. We are looking to upgrade to a wireless system that can be monitored by a third party. We would also like to incorporate a security system that may be monitored too. We are thinking of connecting a Qolsys IQ Hardware 16-F and the recommended battery backup to the fire alarms and a Qolsys IQ Panel 2 Plus. Does Qolsys recommend specific security monitoring devices to be used with its systems, i.e. door alarms, window alarms, motion sensors, video cameras, etc.?
Julia Ross
October 29, 2019 14:31
Your pre-wired sensors will come back to a central point, this is where the Hardwire 16-F will be mounted. Some of your devices will have a 2-wire connection (doors, windows) some will probably have 4 wires (motion detectors, glass break detectors). The 4-wired devices have 2 wires for the zone, and 2 wires for power. The Hardwire 16-F requires its own connection to a transformer and to a backup battery. It will then provide up to 500mA of current to power things like motion detectors and glass breaks. So, your zone wires will all connect to the Hardwire 16-F, with 2 wires going to the zone, and 2 going to the power output, where needed. I would recommend you use Green and Yellow/White for the zones, and save Black and Red for power on the powered devices.
Chuck
October 27, 2019 11:44
My pre-wire for our new house all have four wires. Do I assume I use the black and red wires for all my contacts when wiring up to the unit?
PeterGV
October 01, 2019 17:05
This is an excellent device. With it, I managed to takeover hardwired door sensors and motion sensors from a previous system. It would have been helpful to me to know in advance that <b>when you learn-in the Translator, its ID will end in a zero</b>. Then, after that, the IDs of each sensor are the same as the Translator's ID, with the zone number that you've connected the hardwired sensor to as the last digit in hex. So, for example, if the Translator learns-in as Sensor ID 3E4B0, the sensor that you wire-up to zone 1 will have sensor ID 3E4B1, and sensor you wire to zone two will be Sensor IDZ 3E4B2, and the sensor you wire-up to zone 15 will be 3E4BF. Knowing this would have saved me a ton of time. The Translator starts sending notifications from wired sensors immediately (even before the Translator has been learned-in to the panel). So, if you're trying to learn-in the Translator and accidentally trip a motion sensor before you've managed to tamper the Translator ... the first sensor that the panel sees will be that motion sensor. Ask me how I know this ;-) As an aside, I'm not sure how Qolsys decided on the dimensions of this unit... but given that almost everyone mounts these in an existing panel, which has a standard set of mounting points, it would have been nice if the holes on the Translator plastic box matched-up with the mount points in the old (ADT-style) metal box. But... hey... nothing some double sided tape and a drywall screw won't cure. Great device.
john
April 15, 2019 10:02
Can the 16th zone also support a 2 wire co? Like on the cosmod2w. Plan on doing combo units and would like to keep hardwired.
cvrobot
February 18, 2019 16:57
Thanks, Frank. I'll check it out now.
Frank
February 18, 2019 16:43
You can use either one for the wireless conversion. The S model is only for burglary zones while the F model also supports a single zone of 2-wire smoke detectors if you are trying to bring those over from the PC1832. If you have not already you can check out our no contract monitoring plans: https://www.alarmgrid.com/monitoring. I recommend the gold plan for the IQ2 as that will include dispatching and the Alarm.com app for self monitoring remote access.
cvrobot
February 18, 2019 16:40
Hello- I have a DSC Powerseries PC1832 wired system and I’d like to convert it to a wireless system with a Qolsys IQ Panel 2+. Will the Qolsys IQ Hardwire 16-S work for this conversion or I need the newer 16-F?
ciara hibbert
February 04, 2019 17:34
Hi Frank, The 4.7s are needed and the change was due to the inclusion of the option to wire in 2-wire smokes to the newer 16-F.
FrankMacaulay
February 03, 2019 02:44
My home's wired sensors already have 2.2k resistors. Do I have to remove them and replace with the provided 4.7k resistors? The older Hardwire 16-S directions say that it will work with any resistor in the 1-10k range. Did the 16-F drop this "resistor learning" feature?
* Based on a 10% APR with 12 months financing. APR's will vary between 10% - 30% based on credit score and various factors.