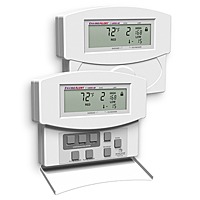 The Winland EA200 is an EnviroAlert dual zone digital environmental alarm that can be integrated with a security system for environmental...

The actual EA200 EnviroAlert digital environmental alarm is a dual zone device. It can monitor the ambient temperature of a room without any external probe and it can also be attached to a remote probe for temperature, humidity or water detection. The on-board temperature sensor uses the first zone and has a temperature range of 32 to 122° F. You can program a high and low temperature limit. Zone two can also be programmed to detect for low and high temperatures, certain humidity levels or the presence of water using an external probe. When using a remote temperature probe, the temperature range is -58 to 299° F depending on which probe you use. The humidity probe can detect 5 to 95% relative humidity. The water sensors are used to protect against flood conditions.

When using the Winland EA200 with a Honeywell security system that has a wireless receiver, you can wire the EA200 to a 5816 wireless transmitter so that it acts as a wireless environmental sensor. You will need to wire the internal contact loop of the 5816 to the zone 1 or zone 2 output on the EA200. The EA200 would detect an environmental alarm using the integrated temperature sensor or a remote probe and that alarm would be transmitted back to your wireless Honeywell security system by the 5816 wireless transmitter. If you wanted to use both zones of the Winland EA200 EnviroAlert, you would have to use two 5816 wireless transmitters. One 5816 would be used for the integrated temperature sensor and the other 5816 would be used for whichever remote probe you connect to the EA200.