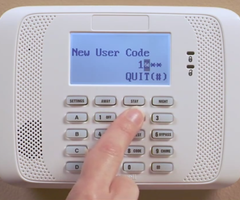 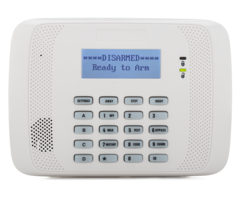 In this video, Jorge from Alarm Grid explains how to tell if the keypad for a wired alarm panel has an RF receiver built-in. When a keypad on a wired panel has an RF receiver, it gives the system the ability to support wireless alarm sensors. Normally, a wired system can only support hardwired sensors. If you want to use wireless sensors on the system, then adding an RF receiver is required. You may also hear an RF receiver being referred to as a wireless receiver. And if the wireless receiver can send messages back to the sensor, then it is known as a wireless transceiver. Some sensors require the use of bi-directional transceivers, and they cannot be used with uni-directional, or one-way, receivers.

An example of a hardwired alarm system that can be upgraded to support wireless sensors is a Honeywell VISTA System. The VISTA Systems have certain keypad options that double as wireless receivers. One such keypad is the Honeywell 6160RF. The 6160RF Alphanumeric Keypad is used for controlling the Honeywell VISTA System, but it also has an integrated receiver. Once the keypad is properly set up with the system, you will also be able to start enrolling compatible wireless sensors. In the case of a Honeywell VISTA with an added receiver, the system will support 345 MHz wireless sensors from the Honeywell 5800 Series. But it can be a bit tricky to figure out if a 6160RF really has an RF transceiver built inside. This is because the 6160RF looks very similar to the standard 6160 Keypad model, which is the same keypad but without the integrated transceiver. Some ways that you can find out include checking the box for the keypad, checking its circuit board, looking for an RF antenna on the inside, and addressing the keypad with the system.