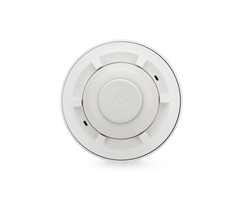 It is important to note that heat detectors are not considered true life-safety devices. While they are certainly better than having nothing at all, most standalone heat sensors will not respond to a fire as quickly as a smoke detector. But if you have an area of the home where you want fire detection and you believe a smoke detector will cause false alarms, then a heat detector is probably your best option. You might also consider getting a combination smoke and heat detector for having multiple fire detection methods. But again, these devices can cause false alarms in certain areas. For some areas, using standalone heat detector devices is truly the best option.

Honeywell 5800 Series Heat Detectors operate at a frequency of 345 MHz. This makes them compatible with Honeywell/Resideo and 2GIG Systems. However, they were originally designed with the Honeywell LYNX Touch Systems in mind. These are uni-directional sensors that are easy to enroll and install, making them perfect for DIY users. You can auto-enroll a 5800 Series Heat Detector with your system to ensure that the Serial Number is programmed in properly. A Zone Descriptor will help you identify the Honeywell 5800 Heat Detector on your system.

The most popular Honeywell 5800 Heat Detector is the Honeywell 5809SS. This heat detector offers fixed temperature and rate-of-rise detector, making very versatile. Its general reliability and strong performance makes it a great option for users who want fire detection in an area that is not suitable for regular smoke detectors. The fixed temperature sensor activates at 135 degrees Fahrenheit, while the rate-of-rise sensor activates upon sensing a temperature increase of 15 degrees Fahrenheit or higher in a single minute. It uses a single CR123A battery, and it has an expected battery life of three (3) to five (5) years.