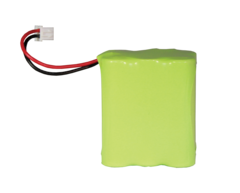 The 2GIG BATT1X is the standard backup battery that is included with all 2GIG Control Panels. It is designed to offer backup power in the...

The 2GIG BATT1X is the standard backup battery that is included with all 2GIG Control Panels. It is designed to offer backup power in the event of AC power loss to the alarm system. The battery life after AC loss occurs is approximately 4 to 6 hours. When AC power is present the battery will remain charged in the panel.

The BATT1X does not support UL985 installations. To comply with the secondary supply requirement in UL 985 Household Fire Warning System Units, you must install the 2GIG BATT2X. This is a high capacity battery backup pack that is sold separately. The BATT2X is designed to last up to 24 hours. Both of these batteries are designed solely for the CP21-345 aka Go!Control 2, not the GC3.

The 2GIG BATT1X is the standard backup battery used with the 2GIG Go!Control GC2 Security Panel. The 2GIG GC2 has been around for quite some time, and this backup battery has also been available for awhile. Except, it is no longer available anymore, as it has been discontinued. The unit has been replaced by a newer backup battery called the 2GIG BATT2X. That battery is superior in virtually ever possible aspect, so this was a nice change. As for the 2GIG BATT1X, it does its job decently. It will keep the GC2 System running during a power outage, just like it's supposed to. But it isn't able to keep it running for very long, only a few hours. Couple that with the fact that you probably won't find this model anymore, and we only give it a 3 Star rating.

There are positive aspects regarding the 2GIG BATT1X. For one, it reliably keeps a 2GIG GC2 running when the electricity goes out. The battery features a convenient plug-in connector that connects with a port on the GC2 System. This makes it very easy to install. The battery has a long product life, and you should be able to go several years without replacing it.

But the downsides to the 2GIG BATT1X should not be ignored. The battery can only keep a GC2 System running for four (4) to six (6) hours at a time. Meanwhile, the 2GIG BATT2X can keep the same system operational for up to 24 hours! In other words, the BATT2X crushed the BATT1X in terms of performance. Another downside to the BATT1X is that it is discontinued. And since batteries have a limited useful product life, you probably won't even be able to find a used 2GIG BATT1X that is worth purchasing. That limited useful product life is also a downside, as it means you will eventually need to replace a 2GIG BATT1X with a new backup battery for the system. These downsides are pretty significant, so we can only give the 2GIG BATT1X a 3 Star score.