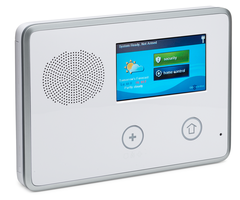 The 2GIG Go!Control is a wireless self-contained alarm system designed for deluxe integration of security and automation control. It supports up to 60 wireless zones using sensors that operate at a frequency of 345 MHz. A cellular radio can be added for accessing Alarm.com. Buy the GC2 here.

The 2GIG GC2 (also known as the Go!Control) is a wireless self-contained alarm system designed for deluxe integration of security and automation control. The panel itself is a color touchscreen display keypad with a built-in siren. There is a backup battery and a 14VDC transformer included (no cable included). The panel supports 64 4-digit user codes and up to 60 wireless security zones across Honeywell and 2GIG 345 MHz protocols. This includes smoke/heat detectors, door/window contacts, motion detectors, etc. There are also two hardwired zones that can be wired directly to the panel. These zones can be programmed as Normally Open (NO) or Normally Closed (NC).

The GC2 panel is also robust Z-Wave controller which supports up to 232 Z-Wave devices! The mother company, Linear, is the largest manufacturer of Z-Wave devices in the country. So you can imagine the versatility this system has when it comes to integrating automation control for your home and/or business.

Similar to the Honeywell LYNX Touch series, Go!Control supports IP and Cellular signaling paths via communication modules that are purchased separately. This allows you to customize your system depending on the communication path that best fits your needs. If you plan to do phone line monitoring you will need the 2GIG GC-POTS module.

Internet monitoring requires the Go!Bridge IP Communicator. The Go!Control panel communicates wirelessly with the Go!Bridge using the 2GIG XCVR2 900MHz Transceiver (Sold separately). Then the Go!Bridge plugs into your internet router using an ethernet patch cable. You will need both devices in order for the panel to transmit signals via the internet connection. For cellular and dual path monitoring, you will need to install a cellular communicator. In fact, the Go!Control panel supports more cellular carriers than any other system on the market today: Verizon, AT&T, Movistar (Mexico) and Rogers (Canada). Each carrier has its own specific communicator which can be found on the cellular communicator page.

Joe Gonnella
November 05, 2018 22:54
Great, we will be able to better answer all of these questions over email. Could you send these inquiries to support@alarmgrid.com?
Andre Vandebeek
November 05, 2018 06:09
hello alarmgrid trying to self monitor my control panel. do my accessories switches etc have to be z-wave compliant or are other company products compatible? i would like for my gc2 to talk to my telus internet router is this possible? can i hard wire my lux1500 digital t'stat to the gc2 panel for control? i have a lorex motion bluetooth camera can this connect to the panel? from my iphone i can't see he communicator module in the panel do i use z wave, vivinit or some other app to communicate to and from the panel vise versa i cant see my phone without a registration how do i by pass? i found the manual on line but seems very general and vague. need more technical info is this available? above all else can i self monitor and control with my iphone if not ........ thank you alarm grid your videos,and documentation have been amazingly awesome resource thanks so much.. as a side note i bot the panelon line with the promise i didnt need a monitoring service i plan to get one in the future but one step at a time thanks again andre vandebeek
* Based on a 10% APR with 12 months financing. APR's will vary between 10% - 30% based on credit score and various factors.