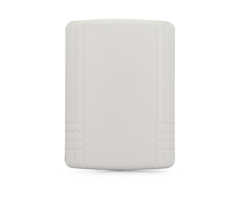 The 2GIG TAKE1e-345 is an encrypted wired to wireless converter module that allows you to use existing hardwired sensors with a 2GIG GC2e or 2GIG GC3e Security System. Not needing to buy new wireless sensors can save you money. Purchase the 2GIG TAKE1e-345 Converter from Alarm Grid.

The 2GIG TAKE1e-345 Encrypted Wired to Wireless Takeover Module allows you to use hardwired sensors with a GC2e or GC3e. Wired sensors connect with the TAKE1e-345, and the module sends signals to the panel on their behalf. The wired sensors will be seen by the panel as wireless devices.

You might also come across the 2GIG TAKE1e-345 as the "Encrypted Super Switch". It supports up to eight (8) hardwired zones, and it essentially converts them into wireless zones. Normally Closed (NC) Form A sensors, wired motion sensors, and wired glass break detectors can all be used nicely with the 2GIG TAKE1e-345. However, you cannot use wired life-safety sensors with the module. This includes any wired smoke detectors and wired carbon monoxide sensors. The 2GIG TAKE1e-345 is designed for use with wired security sensors only.

A unique aspect of the 2GIG TAKE1e-345 when compared with other wired to wireless converter modules is that it can actually feed off of power from an existing wired alarm panel. In other words, the TAKE1e-345 will tie into the 12VDC power connection used with the old panel. This can come in handy if you are upgrading to a GC2e or GC3e from an older hardwired system. However, if the TAKE1e-345 is being used with a fresh installation, then you will need to provide independent power to the unit. This will require a power supply, a transformer, and a backup battery. All these accessories must be obtained separately.

When setting up the 2GIG TAKE1e-345, you should have all of the zones wired first. Multiple sensors can be wired to a single zone, as long as they are wired in series. Assuming you are using the module in conjunction with an existing panel, the common (COM) zone connections can be kept at the old panel. But you will move the remaining zone wires for each zone to the zone terminals on the TAKE1e-345. For sensors that use 4-wire connections, the positive (+) and negative (-) power wires will be kept at the old panel. Make sure that the panel is powered down before completing the connections.