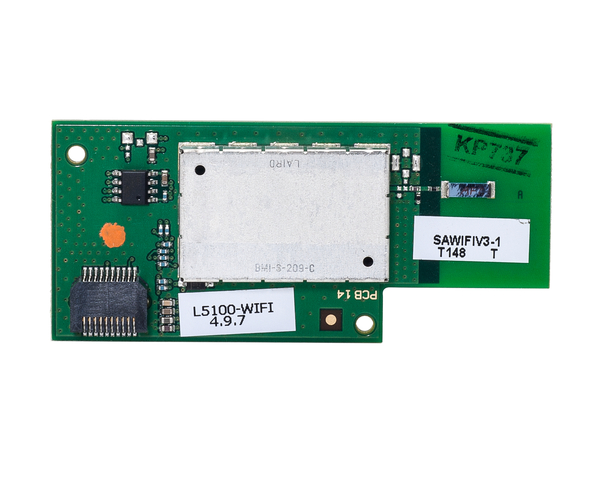 The Honeywell L5100-WIFI is an IP communicator for Honeywell LYNX Touch Systems. By installing and activating this module, you can use your LYNX Touch Panel for IP monitoring service. You will also be able to control your system remotely through Total Connect 2.0. Buy the L5100-WIFI here.

AlarmNet is an industry leader in alternative alarm communication paths. Security systems have historically communicated over traditional phone lines. With the rapid rise in cellular phones and internet based communications, traditional phone lines will not be around for much longer. AlarmNet was developed to give customers without a phone line an option for having their security system monitored by a central station. All alarm signals from an AlarmNet alarm monitoring communicator pass through the AlarmNet Network Control Center on their way to Alarm Grid’s central station. The Network Control Center supervises all Honeywell alarm communicators so that any interruptions in service can be dealt with immediately. With Honeywell’s AlarmNet division and Alarm Grid, you can eliminate your expensive landline telephone service and still enjoy advanced alarm monitoring services to protect your home and family.

The L5100-WIFI internet alarm communicator fits seamlessly inside of Honeywell LYNX Touch Wireless Alarm Control Panels for a clean and easy installation. Once installed and programmed, the WiFi alarm communicator will wirelessly send all alarm signals from your LYNX Touch to your broadband internet router so they can be transmitted to Alarm Grid’s central station. Unlike the ILP5 which is an internet alarm communicator, the L5100-WIFI is a wireless WiFi communicator that does not require an Ethernet cable between your LYNX Touch security system and your router. The WiFi feature is a huge advantage for the do-it-yourself (DIY) installer as it can be very difficult to wire an Ethernet cable through a home that is already built.

The Honeywell WIFI Alarm Communicator is supervised by AlarmNet’s servers so that any interruption in internet service will be seen by an Alarm Grid operator. Once the internet service restores, the L5100-WIFI internet alarm communicator will connect to the network automatically to minimize the chance of missing an important alarm signal. We recommend adding an uninterruptible power supply (UPS) to your home’s router and modem so that your internet service does not go down during a power outage. The L5100-WIFI module gets its power straight from your LYNX Touch Wireless Alarm Control Panel which has a built-in backup battery so that as long as the internet service is working, your WiFi enabled security system will be able to send out all alarm signals.

Unlike the older L5000 LYNX Touch which was the predecessor to Honeywell's current wireless alarm system, you can use the L5100-WIFI alarm communicator in conjunction with the new AlarmNet GSMVLP5-4G a cellular alarm communicator so that your security system has internet communications backed up by cellular communications. A dual path security system is the most secure and reliable alarm monitoring option available because if one path fails, the other path instantly takes over to prevent any failed communications with Alarm Grid’s central station.

Not only does the Honeywell L5100-WIFI internet alarm communicator provide you with secure, easily installed alarm monitoring services, but it also allows you to sign up for AlarmNet’s advanced Total Connect 2.0 service. Total Connect 2.0 is an optional service that allows you to control your L5100 LYNX Touch wireless security system using any web browser or a free application on an iPhone®, iPad®, Blackberry® or Android™ device. You now have the freedom to arm or disarm your Honeywell wireless security system no matter where you are!

Note: The newest versions of the of the L5100-WIFI require that the panel is running Firmware Version 8.00.183 or higher. More information can be found here.

CONTROL MY LIGHTS AND THERMOSTAT FROM MY LYNX TOUCH

Got the communicator to enable WIFI on my L5100 panel. I'm not very handy, but I got it installed pretty quick. I had to call Alarm Grid one time to ask a question about how to get install it, and they were happy to help. Got it up after within 10 minutes of getting it in the mail. It does what it says it'll do and it's worked ever since I got it into the panel.

Dylan Andriano
July 22, 2020 18:12
Be sure the panel firmware Version is 8.00.183. Here is a link to more info on this: https://www.alarmgrid.com/blog/notice-regarding-the-l5100-wifi-module
Bill Watson
July 20, 2020 19:12
Any thoughts on why the WiFi would not show up after install of the card? I did have service through Cell option from local company but cancelled as rarely use but I am interested on using WiFi and basic plan ($10) through your company. I just purchased WiFi and Z-Wave card and installed both while leaving Cell card in place. Opened unit again to re-seat the WiFi card but still no luck for it to show up. Z-Wave showed up OK. I even went to the setting for communication path and only option is none or GMS. Any thoughts other than bad card? Just purchased both cards via Amazon.
Frank
September 25, 2017 14:31
If you have not already signed up for service check out our no contract plans here: https://www.alarmgrid.com/monitoring
Frank
September 25, 2017 14:29
You need to go to the "communicator" field in programming and set the communication to WIFI. After that is saved go back into the "Comm Diagnostics" field and you should be able to connect to your WIFI network.
Ramin
September 23, 2017 23:12
Hi Sterling! I installed a L5100-WI-FI and it says “Communication path not enabled” what does his mean and how can I fix it?
Sterling Donnelly
March 06, 2017 14:41
You won't be able to get Total Connect 2.0 service even if you could get your phone line to work. However, if you add the L5100-WIFI module, you could get service through us using the panel's internet connection (with no phone line needed). Total Connect 2.0 will allow you to arm/disarm from a computer or mobile device and you'll be able to setup text and email alerts directly from the system to any number of recipients.
Frank
March 06, 2017 14:34
It sounds like your phone's digital infrastructure does not support this feature. I recommend installing the L5100-WIFI and setting up our self bronze service: https://www.alarmgrid.com/monitoring
Gerald Stauss
March 05, 2017 00:22
Sterling, I'm considering on the basic TC on my Lynx L5100 through your company. I feel this will not work with my present phone system. I programmed the l5100 with the follow me function but when it calls my cell phone it doesn't respond to the star tone. After much trial and error it seems like I have a digital phone line and the Lynx only gets a tick rather than a tone. I am not sure I can configure the Lynx for a digital phone line. Any suggestions? FYI, my phone is tied into the internet
Sterling Donnelly
January 27, 2017 17:44
You need to use your Installer Code not your Master Code to access programming. The default Installer Code is 4112.
safi safi
January 27, 2017 05:30
hi, plz can give me solution in my email syphaxe@msn.com my problem i can't go to program and i can't add new module, i have my master code but where i go to program he dose't open how i can make hard reset fo model 5200 thanks
Sterling Donnelly
August 08, 2016 13:50
You should have received your Total Connect 2.0 welcome emails so you just have to follow the instructions to set a password and log-in. Let us know if you have any questions once you've logged into your TC2 account.
Nake Domenic
August 07, 2016 10:26
Hi Sterling, I've activated my L5100-Wifi with my house internet router. My panel is L5200 model and I ordered for No control self monitoring. What is my next step to use Total Connect app for my android phone ?
Sterling Donnelly
January 05, 2016 06:00
Yes, the LYNX Connect app will work with a WIFI enabled LYNX Touch system to allow access from a phone or tablet while you are on the same network as the system without any monthly fees.
john
January 05, 2016 02:57
hello! can i connect the L5100 module to my router and only use it with the lynx connect app for iPhone without an alarmnet account. just trying to use my phone or ipad as a second keypad while home
Julia Ross
June 08, 2015 21:13
To remote control using the ILP5 or the L5100-Wifi requires an AlarmNet Account. If you're being monitored via Phone line with your local company, and you're happy with that service, you could buy the L5100-Wifi or the ILP5, and the L5100-ZWave board, and sign up with the Self Monitoring Plan with Automation with Alarm Grid (this would be $20 per month) and keep your regular monitoring via phone line with your existing company. https://www.alarmgrid.com/products/honeywell-l5100-wifi or https://www.alarmgrid.com/products/honeywell-ilp5 and https://www.alarmgrid.com/products/honeywell-l5100-zwave.
Moe
June 08, 2015 14:00
I currently have an L5100 with monitoring done via a local home monitoring company. Purchasing a "automation" module via my local company would costs me nearly 300. I'm interested in purchasing the wifi (or direct wire internet) module to be able to access my Lynx 5100 remotely. At this time I only have a land-line phone connection to the device. If I purchase this module, can I simply attach and configure myself to access remotely or do I need AlarmNet subscription?
* Based on a 10% APR with 12 months financing. APR's will vary between 10% - 30% based on credit score and various factors.