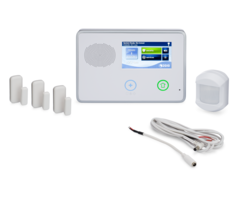 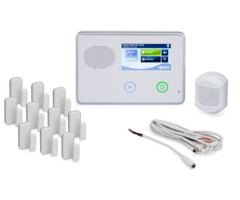 Hi, DIYers. This is Michael from Alarm Grid. And today, I'm going to talk about how many Z-Wave devices are supported by the 2GIG GC2 and 2GIG GC2e The GC2 is also commonly referred to as the Go!Control system, the 2GIG Go!Control panel. It's a fairly old panel. It was one of the first wireless panels released. It was also one of the first wireless panels-- first security panels in general that had built in Z-Wave, which was a big deal at the time. Now the GC2, the Go!Control, the original one, it has standard Z-Wave. And the GC2e has a Z-Wave Plus, newer Z-Wave Plus technology, but they both support the same Z-Wave devices. You can use Z-Wave Plus devices with a standard Z-Wave controller like the GC2. It just will have the range and battery life of a standard Z-Wave advice. But today, we're going to be focusing on the Z-Wave device limits. Now, the GC2 and GC2e are pretty standard Z-Wave controllers, pretty standard Z-Wave hubs and they both support the classic number of 232. That sounds random, but really you'll see that on a lot of Z-Wave controllers, 232 Z-Wave devices. That's the maximum limit for local control. So if you're planning on adding more than 232 Z-Wave devices, this includes things like locks, thermostats, lights-- lights are a big one, add a lot of lights to your system-- garage door controllers, water valves, any automation Z-Wave devices, you're going to have the maximum limit of 232 Z-Wave devices for local control in GC2 or GC2e. And like I said, that's a pretty standard number that you'll see on a lot of Z-Wave controllers. Where this can get a bit confusing, though, is that Alarm.com, that's the interactive automation platform used with these systems, has its own smaller Z-Wave device limit. And that limit is actually 122 Z-Wave devices. So the way that this works when you pair is the wave device with your GC2 or GC2e, assuming that the system is monitored and connected with the Alarm.com servers for security and automation purposes, the Z-Wave devices will get pushed over to Alarm.com. Now that's very important because you use Alarm.com for controlling the devices remotely using your smartphone. You can use a web browser to access the Alarm.com customer website and you can control your devices from pretty much anywhere in the world. You can also include your devices with Alarm.com smart scenes, so that they activate automatically based on certain system events or based on a set schedule. So really to get the most out of it, you're going to be wanting to use Alarm.com Local control is nice. It's convenient, but it's a lot better to use Alarm.com. That's how you really get the robust automation capabilities there. So the way that that works, you can only send up to 122 Z-Wave devices to the Alarm.com servers from any Alarm.com system. So you put your first 122 Z-Wave devices on your GC2 or GC2e and they're going to get pushed over to Alarm.com. But when you add that 123rd Z-Wave device and any number up to 232, the maximum limit for these panels, they're not going to get pushed over to Alarm.com anymore. They're just going to say on the panel for local control. So you have, let's say, 150 Z-Wave devices on your GC2 or GC2e. And there's a new sensor that you're adding and you really want it to get onto Alarm.com. You're actually going to have to go back and delete enough sensors to where you're under that 122 device limit. You're going to have to have Alarm.com refreshed, do a Z-Wave sync with your panel. And then when you add a 120 second Z-Wave device, as long as you're under that limit, that new sensor will get pushed over to Alarm.com. Then you gotta understand that once you add a 123rd Z-Wave device, 124th, et cetera, they're not going to get pushed over to Alarm.com anymore. They're only going to be on the panel for local control. Now, we don't have a GC2 set up on our board, but we do have a GC2e right here. We don't have it powered on. This is just the panel, fresh out of the box actually, just to give you a reminder of what it looks like. This is I believe it's a 5 inch touchscreen here. And that's how you'd use that to enroll your Z-Wave devices. You're going to want to clear them from the network, of course, before doing the inclusion process. It's pretty straightforward and simple, and you can do all your automation control on both the GC2 and GC2e. But like I said, being pushed over to Alarm.com is where you're really going to get the cool automation capabilities and remote access, like you turn on the lights when you're across the country in your home or business. So that's where most of the features come in. So the key numbers to remember are 232 Z-Wave for local control and 122 Z-Wave devices that can be pushed over to Alarm.com. So that's how many Z-Wave devices are supported on the GC2 and GC2e. If you found this video helpful, make sure to give it a thumbs up below to like the video. And remember to subscribe to our channel to get updates on future videos. And if you have any questions about Z-Wave devices or the GC2 or GC2e send us an email at support@alarmgrid.com. Hope you enjoyed the video. Thanks.