AA batteries are some of the most popular batteries available. They are used in all sorts of electronic devices and equipment. As a result, it's not a surprise that AA batteries are the power source of choice for many wireless security sensors and add-ons. Purchase your AA batteries from Alarm Grid. 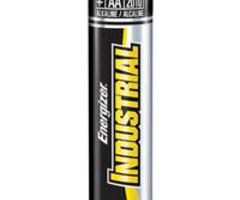 The AA battery was actually first introduced all the way back in 1907. Since then, it has become one of the most widely used battery sizes throughout the world. In 1947, the AA battery size was standardized by the American National Standards Institute (ANSI), effectively cementing it as the convenient portable power supply we know today. The AA battery is very commonly used in portable and handheld electronic devices because of its small size and ease of use. Indeed, everything from TV remote controllers, portable handheld gaming consoles and calculators has used AA batteries. Their overall popularity and large number of useful applications make them very easy to obtain when needed.

However, AA batteries fill an interesting niche in the security industry. They aren't as compact as AAA or coin cell batteries. Additionally, many security manufacturers seem to prefer to use the less popular but slightly shorter and wider CR123A batteries in their sensors. Meanwhile, the AA is left to power some of the larger wireless sensors that require a little more juice. These are sensors that require more demanding applications, such as functioning outside and performing dual-tech motion detection. Some examples of popular security sensors that use AA batteries include the Honeywell 5816OD Outdoor Door and Window Contact, the Honeywell 5800PIR-OD Wireless Outdoor Motion Detector and the Honeywell 5898 Dual-Tech Motion Sensor. The lifespan for AA batteries depends on the type of device that is being powered. Also be aware that some devices may require multiple AA batteries.