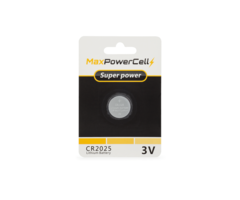 As a coin battery, the CR2025 features a flat and round design. In other words, it is shaped just like that of a coin. In the electronics industry, coin batteries fulfill a very important role. It is very common for a small and discreet device to require just a small amount of reserve electrical power. Even adding small cylindrical batteries such as AAA batteries could throw-off the design and force the rest of the device to accommodate for the size. However, by using a flat CR2025 battery, a designer will probably not be forced to make such a significant adjustment in terms of overall design.

By using a small and compact battery like the CR2025, a security sensor is more likely to remain relatively unobtrusive in the user's home or business. This is largely the same role that CR2032 batteries fulfill. In fact, there is such a little size difference between CR2025 and CR2032 batteries that some devices have been known to use them somewhat interchangeably. But it is important to remember that CR2025 are slighter thinner than their CR2032 counterparts. Trying to use a CR2025 in a sensor that warrants a CR2032 could result in a loose or unreliable power connection for the device.

Although CR2025 aren't quite as commonly used as CR2032 batteries, it is still relatively easy to find examples of sensors that use the thinner version of these two coin battery types. In most cases, CR2025 batteries are used in small and compact sensors that are designed to take up very little space. They are also often used in wireless key fob devices. One example of a security device that calls for the use of a CR2025 coin battery is the Honeywell 5804 Key Fob. Honeywell even produces their own version of a 3-volt lithium CR2025 battery for that purpose.