​CR2032 coin cell batteries are small and compact batteries that are actually used quite often in wireless security sensors. As they are roughly the size of a coin, CR2032 batteries are most effectively used when sensor design and space is a concern. Power your sensors by purchasing CR2032 batteries. 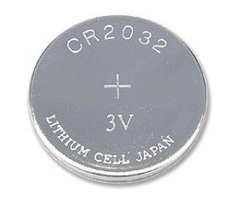 Like virtually every coin cell battery, the CR2032 is flat and round, much like that of a coin. These types of batteries fulfill a very important niche in the electronics industry. Often, a device will require a small amount of reserve electrical power to operate. However, squeezing in a cylindrical battery, such as a CR123A or AA batteries, would require the design as a whole to be adjusted. This would most likely make the electronic device clunkier and more unwieldily.

But with a CR2032 battery, fewer compromises need to be made. Their thin profile makes it very easy for manufacturers to find a convenient spot for the battery. As a result, they do not have to deviate as far from their original design and intention. With that in mind, CR2032 batteries have become extremely popular in the security industry, where it is often incredibly important to retain sensor designs that are small, discreet and compact. Users will typically encounter CR2032 batteries in smaller sensors and those with a thin profile. They are also often used in wireless key fobs.