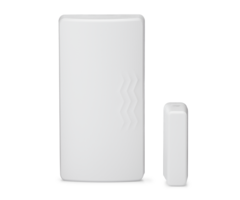 Wireless shock sensors are convenient due to the fact that they are very easy to set up and program with a security system. Like most wireless devices, they can typically be learned-in with a security panel automatically through a process that is commonly referred to as automatic enrollment. These devices generally boast impressive wireless ranges, often in excess of 200 feet away from the security system. This provides the user with an impressively large amount of flexibility and freedom when determining ultimately where to place their wireless shock sensor.

For a wireless shock sensor to work most effectively, it should be installed on the glass surface of a window or casing. This will give the device the best opportunity to detect the shockwaves that would be caused if the glass were to be broken. It should be placed near a corner of the glass, preferably about an inch or two away from the edge. To test the device, you can use a rubber object to tap the glass from the outside. If a tap against the opposite corner of the glass is enough for it to activate, then you can be reasonably sure that the device will activate in the event that the glass were to be shattered. Always test a shock sensor after installing it.

It is important to remember that shock sensors are often more sensitive than sound-based glass break detectors. False alarms are sometimes caused by something tapping against the glass, without actually causing the glass to break. If you decide to purchase a shock sensor, make sure to keep that in mind. Thankfully, as technology has improved, newer shock sensor are less likely to experience this type of occurrence. To get a better idea of what type of shockwave will set off the device, we always recommend giving it a thorough testing before putting it to use.

A great thing about shock sensors is that they have many uses and applications. You can obviously install them on windows to monitor these areas against break-ins. They are also often installed on protective glass casings to monitor the valuables inside. This makes them great for trophy cases or in museums that need to protect priceless artifacts. Shock sensors are also commonly used in jewelry stores and inside gun shops to protect products that are kept inside of glass casings. Overall, these sensor can monitor almost any type of glass very effectively.