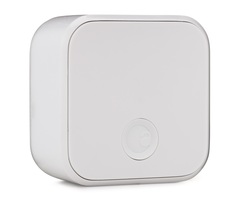 The August Connect is a WIFI smart bridge built for use with the August Smart Lock Pro, and the original Smart Lock. This hub allows the associated Lock to communicate across a WIFI network. This opens up the possibility of remote control through the August App, Apple HomeKit and TC2.

The August Connect module is very easy to use. It simply plugs into a wall outlet and connects with the local WIFI network. Each bridge is capable of supporting one single August Lock device. The main benefit of using the August Connect Bridge is that it improves the flexibility and versatility of both August locks and allows them to be used in a greater number of applications. The original Smart Lock only has Bluetooth technology which provides control from a connected mobile device that's locally in close proximity with the lock. But adding the August Connect allows remote control from the August app.

The Smart Lock Pro has Bluetooth and Z-Wave technology, so pairing it to a Z-Wave controller offers remote control. But if Z-Wave isn't being used, then the Connect hub would be needed for remote functionality. Once integrated into the August App through the August Connect hub, you can also control an August Smart Lock Pro through voice assistants like Amazon Alexa, Apple Siri or Google Home. Another feature provided from the August Connect is the ability to integrate the lock with platforms and services like Nest, AirBnB and HomeAway.

Please note that the August Connect WIFI Bridge is not used to interface the August Smart Lock Pro with Apple HomeKit. Instead, communication between the August Smart Lock Pro and Apple HomeKit is facilitated using Bluetooth connectivity with a compatible HomeKit Hub, such as an iPad, AppleTV or Apple HomePod. The HomeKit Hub must be kept within Bluetooth range (10 to 15 feet) of the lock at all times. You will then be able to control the lock remotely using an iPhone on the same iCloud network.

Note: This is just the standalone August Connect. Alarm Grid also offers a package version that includes both the August Smart Lock Pro and the Connect Hub.