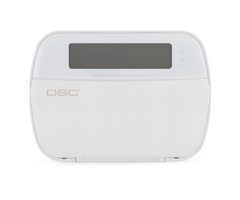 DSC PowerSeries NEO owners looking for a standard system keypad can get the results they want out of the DSC HS2LCD N Keypad. This keypad provides basic system operation and system programming for any PowerSeries NEO Alarm System. It wires-in directly to the Corbus on the alarm panel.

The DSC HS2LCD N is great for use as a primary or secondary system keypad. Being able to locally program your system is an essential function for any DIY user. You can add new sensors, edit zones and adjust system settings with ease. Regular users will appreciate the ability to use the keypad for simple functions like arming and disarming. This makes it an ideal keypad for both Installers and end users. There is also a built-in chime for identifying when zones are faulted. You can add up to eight (8) keypads on most PowerSeries NEO Systems, and 16 on the 128-zone DSC HS2128NK NEO.

When it comes to choosing a primary keypad, the HS2LC2 N is a serviceable option. However, you might also strongly consider the DSC HS2LCDRF9 N instead. The HS2LCDRF 9 N includes a built-in PowerG Wireless Transceiver, which is necessary for using PowerG Sensors with the system. The HS2LC2 N does not include this feature. Since you need to add a keypad anyway, you may as well add a DSC HS2LCDRF9 N so that you can start using wireless sensors with your system. Another option is the DSC HS2LCDP N, which allows you to use proximity tags with the system.

But if you plan to only use hardwired sensors with your DSC PowerSeries NEO, and you also have no desire for proximity tag support, then the DSC HS2LCD is for you. It may be the most basic keypad in the PowerSeries NEO lineup, but for many users that won't matter. Sometimes the most basic option is the best option. Additionally, if you are looking for a secondary keypad, the HS2LCDP N is usually the ideal selection. You won't need more than one wireless transceiver with the system, so adding multiple DSC HS2LCDRF9 N Keypads doesn't make sense. The only other option is the DSC HS2LCDP N, which is good if you want to use proximity tags at multiple system access points.

As for the DSC HS2LCD N, the device includes all the standard features you would expect out of a DSC PowerSeries NEO Keypad. It has a 32-character display, and it can be used for programming all system wired or wireless zones. Remember, you will need a wireless transceiver to use wireless zones. The keypad offers complete menu programming and global partition status for the convenience of the end user. It has support for six (6) different languages. There are five (5) programmable function keys and outdoor temperature display. Backlit keys and an adjustable blue backlit LCD display make it easy to use the keypad at night. Also included are fire, medical and panic keys, plus an input/output terminal. The keypad measures 168mm x 122mm x 20mm.

If you want to avoid mounting the keypad to the wall, you might consider purchasing the DSC HS2LCDWFDMK Desk Mount. This is a convenient stand that will allow you to properly install the keypad without drilling holes.