This encrypted kit contains a Qolsys IQ4 Hub with support for 319.5 MHz Qolsys and Interlogix/GE sensors. It has a built-in AT&T LTE cellular communicator and support for dual-band WIFI. Also included are three (3) Qolsys IQ DW Mini-S door or window sensors and one (1) Qolsys IQ Motion-S. Buy this kit from Alarm Grid!

This encrypted kit contains a Qolsys IQ4 Hub with support for 319.5 MHz Qolsys and Interlogix/GE sensors. It has a built-in AT&T LTE cellular communicator and support for dual-band WIFI. Also included are three (3) Qolsys IQ DW Mini-S door or window sensors and one (1) Qolsys IQ Motion-S. Qolsys S-Line sensors support rolling-code encryption. This kit can be used as an upgrade for an existing Interlogix/GE or Qolsys system.

The Qolsys IQ4 Hub included with this kit supports both the older, non-encrypted Qolsys or Interlogix/GE sensors, and the newer S-Line encrypted sensors. If you have an older panel with non-encrypted 319.5 MHz sensors, and you'd like to upgrade the panel without having to replace every sensor, then this kit is for you. With the included S-Line sensors, you can add additional security to your system, and as older devices fail and have to be replaced, you can replace them with encrypted versions.

The IQ4 Hub is built on the same platform as the Qolsys IQ Panel 4. It has the same Qualcomm SnapDragon 8-core processor and the same Z-Wave Plus controller. The major differences are in hardware. The IQ4 Hub does not have a front-facing camera, used for disarm photos. It also has only one (1) speaker and one (1) 85 dB piezo siren and a single microphone. It doesn't support 2-way voice with the monitoring station, and it can't be paired with the Qolsys IQ Base. It also only supports a single RF frequency for sensors. It does support up to four (4) partitions, up to 128 Zones, and 242 User Codes. With these hardware changes, the IQ4 Hub is offered at an attractive price.

What makes this an encrypted kit are the provided sensors. Three (3) Qolsys IQ DW Mini-S door or window sensors come included. This ultra-compact sensor is perfect for protecting doors, windows, cabinets, or any other type of opening. With S-Line technology, the panel and sensor sync up during programming. From there, each signal sent between the sensor and the panel is different, with only the sensor and the panel knowing what the next transmission will be. This gives the user added peace of mind that the sensor's signals can't be spoofed or copied. It has a transmitting range of approximately 600' (182m) in open air. The IQ DW Mini-S uses two (2) CR2032 batteries, which are included. The estimated battery life is about five (5) years.

The Qolsys IQ Motion-S has a coverage area of 30' X 40' (9.1m X 12.1m) and a transmitting range of about 600' (182m) in open air. As with all passive infrared (PIR) motions, avoid mounting the IQ Motion-S near HVAC vents, or other possible sources of movement or rapid temperature changes. In installations with pets, this motion offers pet-immunity for small pets up to 40 lbs (18.1kg). Be sure to follow the installation instructions for pet-immunity. This includes not mounting the motion where animals can climb on furniture or stairs to come within detection range.

Feature Comparison between the IQ Panel 4 and the IQ4 Hub: 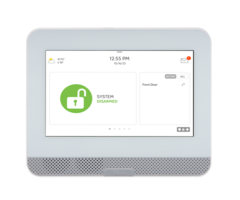