How Do I Activate the Chime on an Interlogix Simon XTi or XTi-5?

You can activate the chime on an Interlogix Simon XTi or XTi-5 by faulting a sensor with a chime-producing sensor group while the system is in a disarmed state. The panel will emit a chime to let the user know about the faulted zone. The chime feature must be enabled in system settings.

A chime will only be produced on an XTi or XTi-5 System if the setting is enabled from basic system settings. To adjust this setting, click on the gear icon in the lower-right corner of the main screen. Then scroll down to the "Chime" option. Click "On" to enable the chime, or click "Off" to disable the chime (shown). Then press "Close" in the upper-right corner of the screen to save your changes. 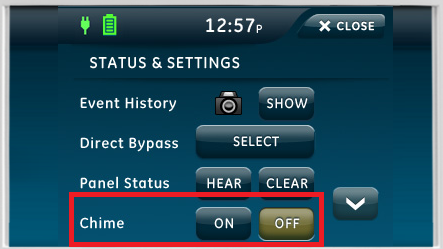