How Do I Properly Test the 5800CO on the Qolsys IQ Panel 2 Plus?

You can properly test the 5800CO on the Qolsys IQ Panel 2 Plus by activating the device's test button. You will need a small, thin object to press and hold the recessed button. From there, you should use canned CO gas to make sure the sensor responds properly to carbon monoxide gas. 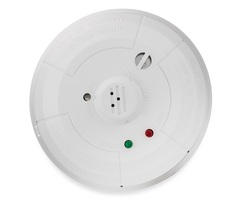 Before conducting the test, you must place your system on test mode with the central station. Most end users find that it is just easiest to contact the central station directly and ask them to put their system on test mode temporarily. This will give them a confirmed time period for them to test their sensors. Additionally, Alarm Grid monitored customers can activate their own system test mode using the MyAlarms.com feature. Failing to place the system into test mode can result in a costly and inconvenient false alarm.

The testing process for the 5800CO will involve two steps. First you will use the test button to test the sounder, LED lights and signal transmission. Then use canned CO gas to make sure the sensor can properly detect carbon monoxide. You should clear the resulting alarms after you have completed the testing process. Complete the following steps to test the 5800CO for proper operation:

2. Perform the button test. Use a small, thin object to press and hold the test button on the 5800CO. A thumbtack, toothpick or paperclip should work nicely. You must press and hold the recessed test button for at least two (2) seconds for the sensor to activate. This should cause an alarm on the system. Disarm the system to silence this alarm. The 5800CO will emit a single round of the temporal-four sound, and its LED light will rapidly flash green. These actions indicate that the 5800CO is working properly. You can see the test button for the 5800CO in the picture below:

3. Perform the functional test. The user should perform the functional test within the first 27 seconds following the button test performed in step 2. The green LED light should be flashing one second on, one second off. This indicates that the sensor is currently awaiting the introduction of canned CO gas. Shoot your canned CO directly into the three holes in the center of the 5800CO. Make sure not to inhale any of the CO gas, as it is extremely toxic.

The 5800CO will begin producing the temporal-four alarm sound and will transmit another alarm signal to the alarm panel. The alarm will continue until the sensing chamber is free of CO gas. This sound indicates that the sensor has properly detected the CO gas and that it has passed both tests. Additionally, the red LED light will blink on and off every second and the green LED will turn off. You can now clear the functional test alarm on the IQ Panel 2 System using your Master Code. The 5800CO sounder will stop after the CO gas has exited the sensing chamber. The green LED light will resume its normal operation of blinking once every ten seconds, and the red LED will stop blinking. 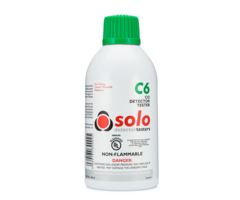