How Do I Take the Cover Off a Honeywell T6 Thermostat?

The Honeywell T6 is a Z-Wave Plus thermostat that can operate without the use of a C-wire. This makes it very easy for end users to set up and install. An end user might have to take the cover off of their Honeywell T6 Z-Wave Plus Thermostat if they need to change the batteries or access the device's wiring. They simply need to pull the device off its mounting bracket. When they are finished working on the device, they can snap it back onto the mounting system, and it will continue working as usual. Please note that the device uses three AA batteries, and it has an average battery life of 1.5 to 2 years.

The steps below assume that the device is currently mounted to the wall on its UWP mounting system. Complete the following steps to remove and replace the cover for a Honeywell T6 Thermostat:

1. Remove from mounting system. Push up on the T6 Thermostat and pull away on the device. The device should come off of its mounting plate, and its cover will be open. The opened device can be seen in the picture below: 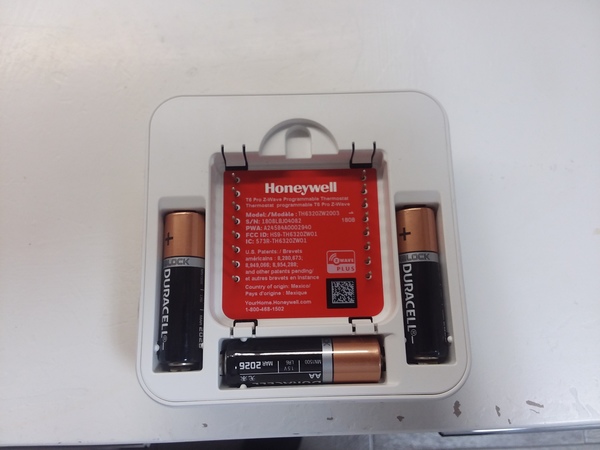 2. Complete any work. Compete any tasks that required you to open up the T6 Thermostat. This will most likely include replacing the batteries or adjusting the wires connected to the HVAC System. Continue to the next step when you are finished and want to close up the T6.

3. Close the device. Take the T6 Thermostat and push it up against the UWP mounting system, making sure that the pins align. The device should click back into place. The HVAC system will immediately resume heating or cooling the building once the thermostat has been reattached.