You can test your Honeywell 5808W3 using the test button on the device. This will let you know whether or not the sensors on the 5808W3 are within the proper sensitivity limits. If you are monitored by a central station, you must place your system on test mode before testing the 5808W3. 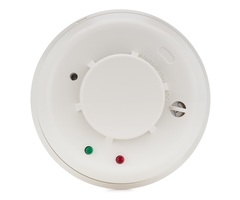 The 5808W3 can also be tested using canned smoke and a heated hair dryer. These tools will allow the 5808W3 to be tested as though it were actually detecting a fire. It is recommended that you use all three listed testing methods for the 5808W3. This is the best way to fully ensure that the device is functioning properly. But at the very least, you should use the test switch to test the device.

Complete the following steps to test a Honeywell 5808W3 Smoke and Heat Detector:

1. Put the system in test mode. Contact your monitoring company, and let them know that you are testing your 5808W3. This will prevent any false alarms from occurring on the system. You will be able to choose a start and end time for the test. This means that you will not need to contact your monitoring company again when you complete the test. During this time, your system will not report out to you or a central station. Please note that placing the system in test mode is really only necessary if your system is protected by a central monitoring station.

2. Test with test switch. On the front of the 5808W3, there is a recessed test switch for testing the device. Use a thin object, such as a screwdriver or Allen wrench, to press and hold the recessed test switch for five seconds. After doing this, the system will go into alarm. If the sensors on the device are within their sensitivity limits, the LED on the 5808W3 will blink once every second, and the sounder will activate within three seconds. After testing the 58083, clear the fault on your alarm system. The diagram below shows the location of the test switch: 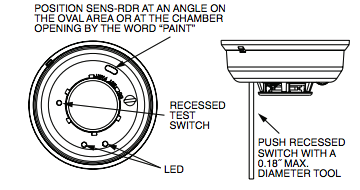 3. Test using canned smoke. Direct canned smoke into the vents of the device. If the 5808W3 is functioning properly, it should detect the smoke and send the system into alarm. After testing the device, make sure to clear the fault on the system.

4. Test using a hair dryer. A heated hair dryer is the perfect tool for testing the heat detection function of a 5808W3. To do this, run the hair dryer, and direct the heated air towards the sides of the 5808W3. When doing this, hold the hair dryer at least 12 inches away from the device. This will prevent the hair dryer from damaging the plastic on the 5808W3. If the 58083 is functioning properly, it should detect the heat and send the system into alarm. It may take a few minutes for the device to activated. Once you have finished testing, make sure to clear the fault on the system.