How do I enroll a Honeywell 5817 wireless transmitter?

The Honeywell 5817 wireless transmitter must be enrolled to your Honeywell security system before it can be used. There is a unique transmitter ID assigned to each Honeywell 5817 during manufacture. You must enroll the transmitter ID within the zone programming menus of your Honeywell security system. Before enrolling, you should make sure the 5817 transmitter's battery has been installed in the battery holder. Next, set all (4) DIP switches to the off position. With the battery installed and the DIP switches set to off, you may proceed with enrolling the 5817 transmitter. When programming the wireless transmitter, make sure to set it with a supervised RF zone type. 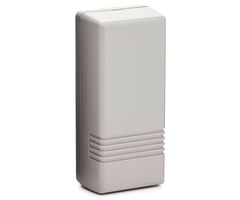