How Does the Alarm.com In-App Alarm Cancel/Verify Feature Work?

The free Alarm.com In-App Cancel/Verify feature works by allowing users to notify the central station as to whether a recently triggered system alarm was legitimate or a mistake. By making the appropriate selection within the app, a central station operator will be able to take proper action. 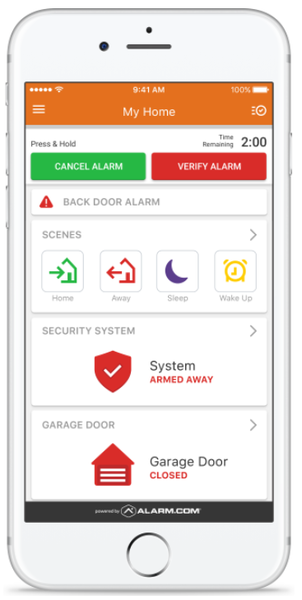 When an alarm occurs on a security system that is connected with Alarm.com for central station monitoring service, the alarm is first forwarded to the Alarm.com servers. Alarm.com then forwards the alert to the central station so that action can be taken by a trained operator. This usually involves attempting to contact the end user, then based on the result of that attempt, sending emergency dispatch to the system location if warranted. A central station operator must assume that any incoming alarm is legitimate, unless informed otherwise. The Cancel/Verify feature is useful for letting a central station operator know in a timely manner, that an alarm is legitimate and that help is needed, or for informing the operator that the alarm was a mistake and that no dispatch of authorities should take place. By using this feature properly, you can help ensure a prompt response during an actual emergency and prevent false alarms and unnecessary dispatch when help is not needed.

Keep in mind that this timer is only an estimate. If a central station operator acts quickly enough, they might still perform pre-dispatch phone calls and send out authorities before the Time Remaining timer has elapsed. If that happens, it is possible that emergency dispatch will still be sent, even though a user activated the Cancel Alarm function within the two (2) minute window. At that point, the user must handle the alarm in the conventional manner. This will usually involve responding to an incoming phone call from the central station. The user can provide their False Alarm Passcode to let the operator know that everything is alright, or they can inform the operator that help is needed ASAP. A user may also provide their verbal duress code to discreetly let the operator know that they need help. This is normally done in hostage situations.

Remember that even if you successfully activate the Cancel Alarm or Verify Alarm function, the central station and/or the local authorities may still attempt to call you for more information about what happened. For a legitimate alarm, you may be contacted to provide additional information so that the local authorities can respond in the most effective manner possible. For a cancelled alarm, the central station operator might still want to check-in anyway in case something is wrong after all. Once you Cancel or Verify an alarm, the selection will be seen on the main page of the Alarm.com App. It’s also important to note that if multiple users try to Cancel/Verify an alarm, only the response from the first user to successfully send a command will be seen. Any other users who attempt to submit an additional response will receive a message indicating that a command has already been sent. 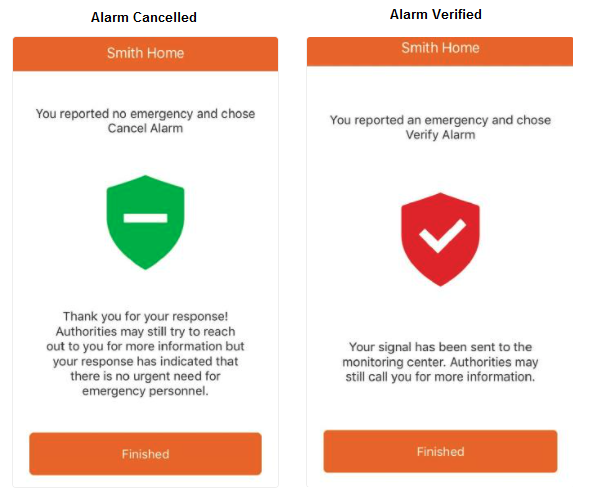 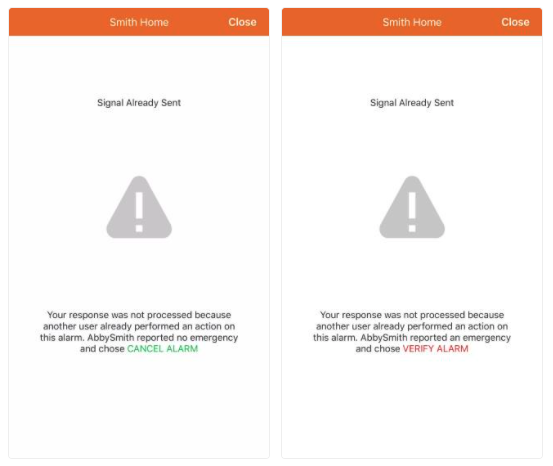 As a final note, the Alarm.com account must have the Cancel/Verify feature enabled by the user's alarm monitoring company in order for the Cancel Alarm and Verify Alarm buttons to appear. If the feature has not been enabled, then the buttons will not appear during alarm events. Alarm Grid will enable this feature for any monitored customer at no additional cost beyond their usual monthly monitoring fee. Additionally, only Alarm.com logins with Master-level authority will be able to send a Cancel Alarm or Verify Alarm command. The buttons will not appear for logins that have less than Master authority. Make sure you are using an account with Master-level authority if you would like to cancel or verify an alarm from the Alarm.com Mobile App.