What are the Different Types of Alarms on a Security System? 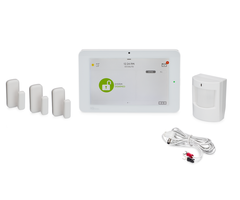 When an alarm occurs on a monitored security system, an alert will be sent to the central station and/or the end user (via text and/or email), depending on the user's alarm monitoring plan. This alert will indicate the type of alarm that has occurred. The central station operator and/or the end user will typically respond differently based on the type of alarm event. Knowing the various types of alarms is important for deciding what action to take during an emergency. Possible actions taken by a central station operator can include contacting the end user to make sure that everything is alright, requesting immediate emergency dispatch to the location, or even just leaving a message for the user. Whenever an alarm occurs on a system, the assumption should always be that the alarm is legitimate and there is a real emergency, unless there is specific knowledge or evidence that states otherwise. False alarms are alarms that occur by accident when there is no actual emergency. Preventing false alarms on security systems is very important.

Burglary alarms, also known as intrusion alarms, indicate that there is a security breach and that someone has gained access, or tried to gain access, to an area without proper authorization. Burglary alarms can be audible, in which the system sirens and strobes will activate to scare off any intruders. Audible burglary alarms are usually preferred, as they are best for minimizing property damage. But you can also set up silent burglary alarms so that no sirens and strobe lights activate. A silent burglary alarm can be useful for catching an intruder in the act, as the intruder will be much less likely to know that they have triggered an alarm. In most cases, the central station will attempt to contact the end user when an intrusion alarm occurs, before requesting emergency dispatch. This is because accidental intrusion alarms are relatively commonplace, and the central station wants to do its part in preventing false alarms. Sensors that are often used to trigger intrusion alarms include door and window contacts, motion sensors, and glass break sensors.

The two (2) life-safety alarms that can occur are fire alarms and carbon monoxide (CO) alarms. Fire alarms occur when there is an activated smoke detector or heat detector, while CO alarms occur when there is a triggered carbon monoxide sensor. These alarms are always audible to quickly alert building occupants. This helps to ensure that they vacate the premises as quickly as possible. Please note that a central station operator is required by law to request emergency dispatch any time there is an incoming carbon monoxide alarm from a security system. In residential applications, the monitoring station will call the premises to be certain there is no one at the site who is unaware that an alarm has been triggered. However, regardless of what they are told by anyone they may contact at the site, the proper authorities will be dispatched.

Lastly, an auxiliary alarm is a catch-all type of alarm that doesn't cover any of the aforementioned types. An auxiliary alarm may indicate a medical emergency, in which a medical alert sensor has been activated. It could also indicate a broken HVAC system where a temperature sensor has activated, causing a freeze alarm or a high-temperature alarm. Or it may indicate a flood alarm due to an activated flood sensor that has been triggered by a flood or water leak. With auxiliary alarms, there is usually an audible alert on the panel or the panel's keypad, but it isn't as loud as an audible burglary alarm or a life-safety alarm. This is because the siren is not activated in an auxiliary alarm. One very important aspect when setting up a system zone that can trigger an auxiliary alarm is that you must let the central station know what type of sensor is being used. This is because the central station will need to know what exactly caused the alarm so that they respond properly. For example, the proper response for a serious medical emergency is very different from the proper response for a temperature sensor alarm caused by a broken HVAC system.