Which Wires Do I Use When Wiring a 2-Tone Siren?

In 2-tone wired sirens, the black wire, and either the yellow or red wire, connects to the panel's siren output. The red wire produces a warble tone, and the yellow wire produces a steady tone. The choice to use either wire is dependent on which sound an end user wants the siren to produce.

The 748LC Low Current Dual Tone siren has 5 wires available to wire, 3 of which are used for the sounder. Of the 5 wires coming out of the back of the 748 LC siren, there are 1 black wire, 1 yellow wire, 1 red wire and 2 white wires. The black wire and either the yellow wire or the red wire connects to the siren output on the panel. As stated above, the black wire is the negative connection for the unit, and the red or yellow wire are the positive connection for the unit. In certain installations, especially those that require a permit, there may be a requirement that has be to followed for selecting which tone to use. Each alarm output on the panel can support the yellow or the red wire. If your alarm system only has one sounder output, you will need to select either the red wire or the yellow wire for installation. If your system has two alarm outputs, the yellow wire can land on one output and the red wire can land on the other. This can provide a separate alarm tone for a burglary and fire alarm. 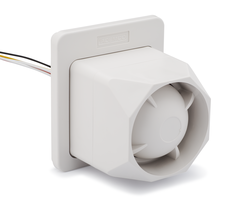