Yes, an ADC-V721W will only work with Alarm.com. The security camera will not work unless it is connected with the ADC servers. The end user will need to have an alarm monitoring plan that includes video surveillance, as well as access to the Alarm.com interactive service platform. 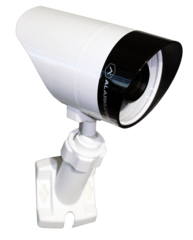 A notable exception to this rule is the Qolsys IQ Panel 2 Plus Alarm System, which allows a user to stream live video for certain types of Alarm.com Security Cameras. But even then, the ADC-V721W is not compatible with this feature. Instead, a user would need to upgrade to the newer ADC-V722W. Unlike the ADC-V721W, the ADC-V722W is capable of being used with live streaming through the IQ Panel 2 Plus. But keep in mind that most alarm control panels do not support the live streaming of security cameras. The IQ Panel 2 Plus is just an exception to this generalized rule.

The ADC-V721W itself is an HD 720P outdoor security camera. It connects with the Alarm.com service through a WIFI connection. In order to use this camera, the user will need an alarm monitoring plan that includes video surveillance. An example of such a monitoring plan is the Platinum Level Plan from Alarm Grid. The camera comes with its own transformer for supplying power. It does not support power-over-ethernet (PoE) functionality. 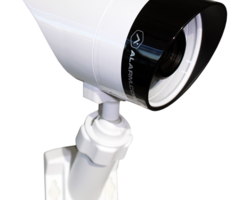