The Honeywell Home PROSIXCT serves as a wireless door and window contact sensor for use with the Honeywell Home PROA7PLUS Alarm Panel. The included magnet is used in conjunction with the built-in reed switch. It also includes a small terminal block for connecting a single NC contact.

In addition to being used as a standard door and window contact sensor, the PROSIXCT can also be used as a wireless transmitter for a single NC wired input. This is done by connecting the wired contact to the designated terminal block on the PROSIXCT. The PROSIXCT will then be able to send wireless signals to the PROA7PLUS Panel on behalf of the connected sensor. A separate zone for the PROSIXCT will be used for this purpose. The two (2) distinct zones can be clearly identified within programming as Reed Switch and Terminal Block. The Reed Switch Zone is for the sensor to be used with its included magnet as a conventional door and window contact. The Terminal Block Zone is for connecting a wired NC contact sensor so that the PROSIXCT can be used as a wireless transmitter.

The Honeywell Home PROSIXCT includes some useful features to ensure the best operation possible. A Green LED light on the sensor assists with enrollment and troubleshooting. There is a tamper switch to let the system know if someone tries to open the PROSIXCT. In addition to the tamper signal, the Green LED will flash when the tamper is activated. The sensor uses a single lithium CR123A battery for power, and it has an average battery life of five (5) years. The sensor can send signals to the PROA7PLUS Panel from more than 300 feet away in an open air setting. RF supervision can be enabled to ensure that the PROSIXCT is communicating with the panel successfully. The sensor uses 128-bit AES encryption for enhanced wireless security. Auto-enrollment is recommended when pairing the sensor. 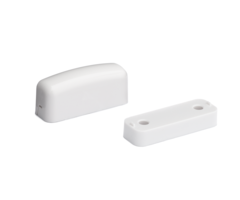 Julia Ross
December 29, 2020 19:20
This device can monitor a Normally Closed only external contact. The external contact wiring should be limited to 3 feet. To my knowledge, there aren't any of the PROSIX sensors that can accept a Normally Open external input (at this time). There is the <a href="https://www.alarmgrid.com/products/honeywell-5817cb">5817CBXT</a> which you could use if you have the <a href="https://www.alarmgrid.com/products/honeywell-home-protakeover">PROTAKEOVER</a> module and set it for Honeywell 5800 Series.
John Consiglio
December 29, 2020 15:31
Can this be used to monitor a residential waterflow? Will it monitor normally open contacts?
* Based on a 10% APR with 12 months financing. APR's will vary between 10% - 30% based on credit score and various factors.