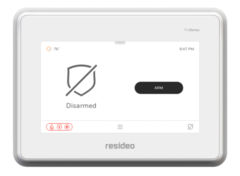 The Resideo PROA7C is a sleek and modern alarm panel that offers support for encrypted PROSIX and Honeywell SiX Series Sensors. You will need to provide one or more upgrades to get the PROA7C monitored and connected with TC2 and/or a central station. Buy the Resideo PROA7C From Alarm Grid.

The Resideo PROA7C is a different version of the Resideo PROA7PLUSC that has some features removed. Some users call this the "non-Plus" model. It lacks WIFI, Z-Wave, and Bluetooth, which limits its functionality. You must add WIFI and/or cellular functionality to get the system monitored.

As a security system, the PROA7C actually has some really great prospects. It has an extremely clean user interface (UI), and its crisp, neutral design will certainly help to bring your home or office into the modern age. Although this version of the ProSeries Panel is a bit empty on its own, it will only take one or two "add-ons" to get the system monitored and unlock its true capabilities. You can view the system as a blank canvas to build around.

If you have gotten your PROA7C System monitored, and you are looking for compatible sensors, them you have some nice options to choose from. The system's built-in PROSIX Transceiver offers support for up to (127) zones of PROSIX and SiX Series Sensors. The PROSIX and SiX Sensors all utilize 128-bit AES encryption for excellent wireless security and protection. To use the panel's other (123) wireless zones, you must add a PROTAKEOVER Module. This will allow you to choose one (1) of five (5) available legacy frequencies to use associated sensors. In total, this will give you (250) zones on the system. That is, (127) encrypted PROSIX and SiX Series Zones and (123) legacy zones of Honeywell 5800, 2GIG 345 MHz, Qolsys & Interlogix 319.5 MHz, DSC 433 MHz, or Bosch.

One of your top priorities with the PROA7C should be getting it monitored. With the base equipment included here, that us not possible. You will need an AlarmNet Communicator. Arguably the most popular option is to get a Honeywell Home PROWIFIZW. That unit doubles as both an IP communicator (WIFI only) and as a Z-Wave Plus automation controller. Adding WIFI is required if you want to use a Honeywell Home PROWLTOUCH Keypad, as that device pairs across the local WIFI network. You might also consider going cellular if internet outages are a concern. The available cellular communicators for the PROA7C are the Honeywell Home PROLTE-A AT&T LTE Communicator, and the Honeywell Home PROLTE-V Verizon LTE Communicator. Also keep in mind that it is possible to set up both IP and cellular for dual-path connectivity. Getting the system monitored will also allow you to set up Total Connect 2.0 service, provided that your monitoring plan includes access.

Some other features for the PROA7C include its four (4) partitions, (96) total user codes, and up to (4,000) Events in the Log. You may see that the PROA7C System does not have a front panel camera. The PROA7PLUS uses this camera for disarm photos, and Resideo may add additional camera features sometime in the future. But this will not be possible for the PROA7C, as it lacks the camera entirely. If disarm photos do not interest you, then you aren't missing much by not having the camera. But this is another reason why you might consider getting the PROA7PLUS. You cannot add the camera to the PROA7C later on.

Also absent from the PROA7C is Bluetooth Low Energy (BLE). You cannot connect your phone to the system across Bluetooth to set up optional automatic Bluetooth disarming. If you were hoping to use that feature, then you will definitely want to get the PROA7PLUS. There is no Bluetooth "add-on" for the PROA7C, so you cannot go and add the feature later.

This is the commercial version of the PROA7C that has "Resideo" written across the front. There is also a residential version that has "Honeywell Home" written across the front. That is the only difference between the systems, and you can really use either one in any setting. Just choose based on whether you want your alarm panel to say "Resideo" or "Honeywell Home". They really are the same system in every other aspect.

A plug-in transformer comes included with the PROA7C, but wiring does not. You can use a Honeywell LT-Cable with the system to make setup as easy as possible. Or if you are using more standard wiring, them you can refer to the table below to see the maximum wire run based on gauge. The PROA7C also includes a plug-in backup battery that should last about three (3) to five (5) years. Never connect or remove any added hardware while the PROA7C System is powered on.