Heat detectors are not considered to be life-safety devices. However, since they do monitor for fire or extremely high heat conditions, they are still important devices to install. The Resideo PROSIXHEATV is perfect for installation in areas where a smoke detector is not suitable, but there is still a risk of fire. Areas such as garages, attics, sheds, kitchens, and even bathrooms are better protected with the installation of a heat detector. These areas tend to be problematic for a smoke detector due to the increased risk of a false alarm. Environmental conditions such as heavy dust, chemical fumes, steam, and smoke from cooking have all been known to accidentally activate a photoelectric smoke detector. Please read the Limitations of Fire Alarm Systems for important information about the proper installation and maintenance of a fire alarm.

Resideo and Honeywell Home made their first products featuring 128-bit AES encryption with the Lyric Alarm System and the SiX Series Sensor lineup. However, with that lineup they never released a stand-alone heat detector. The Honeywell SiXSMOKE operates as a combination smoke and heat detector and can be programmed to function as a heat-only detector, but many users opt not to use it in this way. Rather than purchase a smoke detector and allow it to operate only as a heat detector, those users may simply leave certain areas unprotected. And, unfortunately for Lyric users, the PROSIXHEATV is not compatible with the Lyric.

For those users who have adopted any one of the ProSeries panels though, the Resideo PROSIXHEATV fills that gap. While there is a PROSIXSMOKEV also available users now have the option to install a heat detector in areas where the installation of a smoke detector is ill advised. All communication between the PROSIXHEATV and the ProSeries panel is completely encrypted using 128-bit AES encryption. While traditional wired heat detectors do not have a built-in sounder, the Resideo PROSIXHEATV does have a sounder rated at >85dBa (Minimum) at 9' (2.7m). This also allows it to support the One-Go-All-Go Feature supported by all of the life-safety sensors in the PROSIX Series lineup.

One-Go-All-Go is a feature supported by the ProSeries panels. It allows the panel to command all life-safety sensors to activate their sounder any time a Fire or CO alarm is triggered. Because this is a programmable feature, it can be disabled through the ProSeries panel programming on a per-zone basis, but it is recommended that this feature be enabled for all sensors that support it. The Resideo PROSIXHEATV supports this feature and even though heat detectors are not considered life-safety devices, because the PROSIXHEATV causes a fire alarm when activated, it is included in One-Go-All-Go operation. When a Fire alarm is triggered, all sensors with this feature enabled will sound Temporal 3 pulsing. When a CO alarm is triggered, all sensors will sound Temporal 4 pulsing.

As with most wireless sensors, the PROSIXHEATV sends a tamper signal if the heat detector head is removed from the base. In addition to the tamper signal, there are two more features that make tampering with the detector more difficult. There is a breakaway tab or pillar on the base that can be broken away. When this pillar is broken, a user must hold in a screw driver or similar tool into a tab while turning the heat detector head counterclockwise. To further tamper-proof the device, a screw can be installed next to the tab which requires a user to first remove the screw, then press in the tab to remove the detector head.

The Resideo PROSIXHEATV sends an encrypted check-in signal to the alarm panel every 60 seconds. The panel requires at least one check-in signal to be received from the detector every 200 seconds. If the panel does not hear from the detector for a full 200 seconds, it will report a trouble condition for the PROSIXHEATV. This will result in the panel beeping and a report being sent to the monitoring station when applicable. Common reasons for this type of trouble are the device being removed from the site without being removed from panel programming, and interference due to an environmental change such as a large metal object being moved into the detector's transmission path. The device is supervised for a low-battery condition, and will signal a low battery to the panel approximately 30-days before the battery will die.

A feature that is somewhat unique to the Resideo PROSIXHEATV, as compared with many other heat detectors, can be found in the fixed temperature portion of the detector. For most heat detectors, when the fixed temperature sensor is activated it cannot be reset. That means any time the ambient temperature rises above 135℉ (57℃) and the detector activates, it must be replaced. This limitation made functional testing of this portion of the heat detector impossible. The PROSIXHEATV, however will reset on its own if the temperature rises above 135℉ (57℃), as long as it doesn't rise above 195℉ (90.5℃). When the temperature falls below the alarm threshold, the sensor will automatically reset. The Resideo PROSIXHEATV is an excellent entry into the ProSeries lineup of sensors and would make a great addition to any of the ProSeries panels. 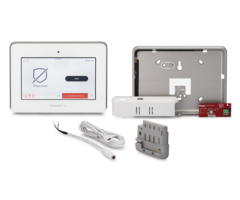 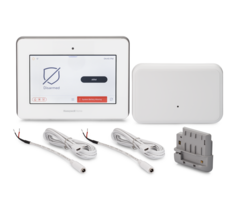