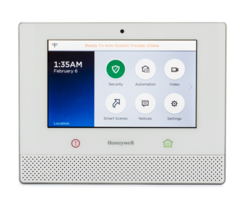 The Lyric Controller is Honeywell's premier security and automation control panel in the form of a 7.0 inch graphic touchscreen keypad. Similar to other alarm systems such as Honeywell's LYNX Touch series or 2GIG's Go!Control series, the Lyric Controller is a self-contained system that integrates everything it needs into the keypad. However it is the first wireless alarm system to offer fully encrypted (128-bit AES) wireless technology between peripheral sensors. Currently, the only compatible sensors that support the encryption technology are Honeywell's new SiX series sensors. They use a 2.4GHz WIFI signal to communicate bi-directional signals to and from the Lyric Controller. The controller is able to poll for live battery and RF signal levels from any enrolled SiX sensor. These accurate readings are available locally on they keypad and even remotely on Honeywell's updated AlarmNet 360 server.

Physically, the Lyric touchscreen looks very clean and is equipped with an integrated camera for snapshots based on customizable system operations. Yes, you can trigger a photo to be taken upon disarm! These can be uploaded to Total Connect and generate email/text alerts as well. Unlike its predecessors, the Lyric Controller now has built-in WIFI and Z-Wave modules. This means that the system is capable of connecting to your WIFI network and building a local Z-Wave mesh network, right out of the box! The only communication module that requires a separate purchase is a cellular communicator.

The Lyric Controller is the first of Honeywell's all-in-one wireless alarm panels to support a CDMA radio which means it will work with Verizon. The Lyric-CDMA will be popular for those in areas where AT&T may be marginal. The Lyric-3G cellular communicator is designed to report signals on the 3G AT&T network. However if you have AT&T coverage in your area, the LYRICLTE-A is our recommended communicator since it uses AT&T's newer faster LTE network. Although WIFI communications can be used standalone for monitoring, the cellular path is by far the most reliable since it does not rely on any local routing equipment or AC power. Honeywell designed a brand new way to install the cellular modules while the system is still powered without opening up the panel. There is a new side compartment designed to cut local power when you initiate the cellular install in panel programming. This makes it easier to add cellular communications after the system is already configured on WIFI.

The Lyric controller was named a "controller" since it is much more than a security panel. It is also a robust automation controller that supports up to 72 Z-Wave devices in the form of lights, locks and thermostats. For those looking to expand more into home or business automation this panel is exactly what you are looking for. There are customizable scenes, rules and schedules with triggers ranging from system operations like arming/disarming to zone faults. Another new feature that the Lyric offers on the automation side of things is the ability to integrate the Lyric Thermostat. This is the first time a WIFI thermostat can be integrated into automation scenes on a Honeywell alarm system. It is also the first WIFI thermostat to be available for remote access with the Total Connect 2.0 interactive app.

All in all, the Lyric Controller is designed for alarm owners who are looking to future-proof their alarm system and push to the very edge of alarm and automation technologies. This device is also flash-upgradeable so when new features are released your alarm company can push down the newest firmware. There are easy ways to integrate wired system infrastructures through the form of wired to wireless translators. In other words, just because you have an existing wired system that does not mean you should not upgrade to the Lyric. You can use the majority of your wired peripheral sensors (excluding life-safety devices) and simply connect them to a converter like the 5800C2W that will transmit them to the Lyric.

The Lyric comes with a transformer but no cabling included. Check out the LT-Cable for easy power cycling and installation. If you do not wish to wall mount your panel the LCP500-DK is a great desk mount option! Alarm Grid also offers a refurbished version of the Lyric Alarm System, which is available here. Please note that the Lyric is also sometimes referred to as the Honeywell LCP500.