Excluding the Kwikset Z-Wave Lock from the Lyric Controller

Excluding the Kwikset Z-Wave Lock from the Lyric Controller 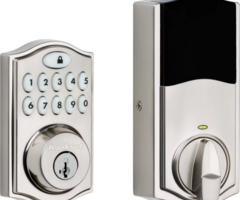 In this video, Michael from Alarm Grid goes through the process of excluding a Kwikset Z-Wave Door Lock from a Honeywell Lyric Alarm System. Excluding a Z-Wave device basically means clearing it or deleting it from the network. This is done in a couple of different situations. One situation is if you want to delete the device so that it is no longer included with your Z-Wave hub.

Another situation is when adding the device to a new Z-Wave controller, as it is common practice to clear a device from the network before attempting enrollment. This is because clearing a device from a Z-Wave network wipes out any residual Z-Wave data, thereby making the inclusion process more likely to go through successful. Even brand-new Z-Wave devices can have some residual data, so clearing first is always recommended for most devices.

Keep in mind that a Kwikset Z-Wave Lock does not need to paired with a Z-Wave hub to clear it from the network. By putting the Z-Wave controller into its exclusionary mode and activating the inclusion/exclusion function on the Z-Wave lock, the device should still clear from the Z-Wave network. When you do this from the Lyric Controller, the panel will display a message stating that a device has been cleared. You can do this whether the lock is paired with the Lyric, with a different Z-Wave, hub, or not paired with a Z-Wave network at all.

A great thing about Kwikset Locks is that they follow a really simple process for activating inclusion/exclusion mode. Most have a convenient button for activating this mode. Just press the button, and the lock will transmit an inclusion/exclusion signal to the Z-Wave hub. This should be done with the lock in close proximity to the hub to ensure that the command goes through successfully.

Hi, DIYers, this is Michael from Alarm Grid, and today I'm going to show you how to exclude a Kwikset Z-Wave lock using your Honeywell Lyric controller. By exclude, I also mean clearing the device from the network. You're basically deleting it from the system. You don't necessarily have to have it paired with the system to perform the exclusion process. In fact, you often will exclude a Z-Wave device from the network before attempting to pair it, so that way it wipes out any residual network information and it can pair with the network more easily. So this is actually something you're going to want to do before you go and pair it with your network anyway. Or you might also be doing this if you're trying to bring the lock to a different Z-Wave network. Maybe you need to delete it from the Lyric and bring it over to your Samsung Smart things or your Qolsys IQ Panel 2 Plus. So you clear from the network, so it can go over to a new network. And like I said, you don't have to necessarily have the lock paired with the network to do the exclusion process. Now the good thing about the Kwikset locks is that they have a very simple inclusion exclusion button that's found underneath the device's main cover, which we have already removed to easily access the button. The button is labeled A right here. Don't confuse it with B. B's for different purposes. We're going to be using A, and that's the inclusion exclusion button. So now I'm going to turn our attention to the Lyric system, and I'm going to show you how we go about excluding it from the network. So we have our Lyric system here. We're at the main screen, ready to arm, system is good to go. And we're going to choose automation, and we're going to press this down arrow on the right. We're going to choose tools, and we're going to choose exclude devices. And now the Lyric is in its exclusion mode for clearing devices from the network. So we're going to press the A button on the lock, and remember that you want to have the lock in close proximity to the Lyric when doing this, otherwise it may not go through. But you see that we have our lock close enough to the Lyric so it recognizes the inclusion exclusion signal, and with the Lyric in its exclusion mode, it excluded an unknown device. The reason it's an unknown device is because we didn't actually have the lock paired with the Lyric system yet. So we didn't know what it was, but it knows that it has cleared the device from the network and wiped out any residual network information. So now we can just go back to the main screen, and the lock's excluded, and we're done. And now that we have excluded the lock from the Z-Wave network, its network information, it's totally wiped. You'll be able to pair it with a new Z-Wave network, including the same Lyric system. Like I said earlier, you would often want to do this before including the lock just to make sure that any residual network information is cleared. Sometimes the locks are paired with the Z-Wave networks before leaving the factory for testing purposes. So even if you have a brand new fresh out of the box Kwikset Z-Wave lock, you would still want to do this clearing process. As you just saw it's very easy to do. It took me less than a minute. So you should have no problem doing it and then you can be sure that it will pair with your network successfully. So now that we have shown you how to exclude the Kwikset Z-Wave lock from your Honeywell Lyric alarm system, we are now going to show you how to include it, which is something you would normally do after excluding the device. So we're going to turn our attention to the Lyric alarm system. And now that we have turned our attention to the Lyric alarm system, we're going to click on automation. We're going to press the down arrow on the right. We're going to choose tools. We're going to choose include devices. And the Lyric is now in its inclusion mode, so we're going to press the A button on the lock to include, which is the same button we used to exclude. And it says that the device is found, and we're going to click done. And then we're going to go back to the lock menu right here. And the lock isn't quite ready yet, but once it is ready, then you would be able to unlock and lock the lock from the system. If you found this video helpful, make sure to give it a thumbs up below to like the video. Subscribe to our channel to get updates on future videos. And if you have any questions about the Kwikset Z-Wave locks, or Lyric alarm system, or monitoring service from Alarm Grid, send us an email at support@alarmgrid.com. We hope you enjoyed the video. Thank you.