Can I Use More Than One Battery Pack in a Qolsys IQ Panel 2?

No, you cannot use more than one battery pack in a Qolsys IQ Panel 2. The system only has one connection port for a backup battery. This means that only one backup battery can be used with the system at any given time. This should provide reliable backup power for most situations.

Every alarm system should have a reliable backup battery so that it stays powered on when the electricity goes out. Keeping your system powered on at all times is necessary for achieving continuous monitoring service. If the system is powered down, then it can't send out signals. If the system can't send out signals, then you can't receive automatic emergency dispatch, and you can't receive alerts from Alarm.com.

Since it's really important to always keep the IQ Panel 2 running, many people think that using a second backup battery is a good idea. Unfortunately, this isn't really feasible with the IQ Panel 2. The system has a single connector port where a Qolsys IQ2 Battery is connected. This is the only spot where the system can receive backup power. The connector port with a connected battery is shown in the following picture: 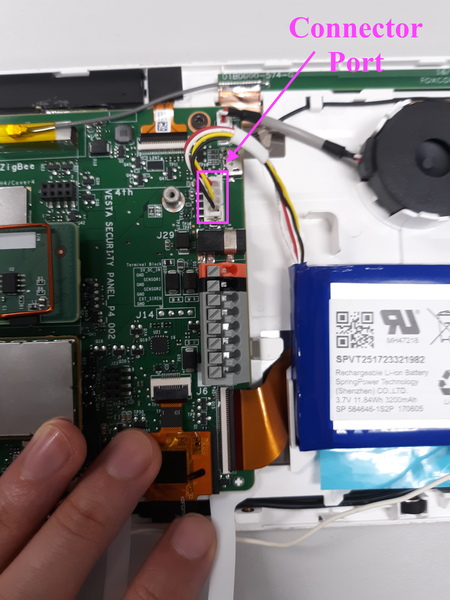 Even if you kept a second backup battery on hand, you wouldn't really be able to use it with the system. The battery maintains its charge using a small amount of AC power from the plug-in transformer. If you kept it outside the system and then tried to use it when the power is out, it wouldn't have any reserve power to keep the panel running.

With that in mind, the only backup battery you can use is the one you keep attached to the connector port inside the panel. The battery will slowly be storing a charge while the system is running on AC power. If AC power is lost, the IQ2 Battery will automatically takeover and keep the system running. The battery can maintain system power on its own for up to 24 hours.

After several years, the battery will lose its ability to store a charge. It will need to be replaced with a new one at that point. You should power down the system, and swap out the battery with a new one. It will use the same connector port that the old one used. But again, you can only use one backup battery at a time.

Some users might think that they can hardwire in a battery to the 5VDC In and GND terminals on the panel, while the AC power adapter uses the barrel connector. Unfortunately, this would likely overload the panel while the system is running on AC power. The 5VDC In and GND terminals are actually meant to serve as a primary power source if the user does not want to use the barrel connector port. These terminals should not be used for a backup power supply.

If you expect that there may be a situation where the power may be out for more than 24 hours, then you may want to take extra measures to ensure that the system is kept running. Your best option might be to invest in a power generator that you can use to keep the system running in case of a long-term power outage.