Both the T5+ and the T6 Pro can be conveniently connected with an HVAC system using Honeywell's UWP back plate system. Simply connect the existing HVAC wires to the back plate and secure the face of the thermostat. If you have an existing thermostat with this type of back plate, you can simply take the old one off and plug the new one in. This is the case if a user is upgrading from an old T4 Thermostat.

Users don't need to worry about the "Pro" naming of the T6, as it is still a DIY-friendly thermostat at the end of the day. In fact, the "Pro" naming really only refers to the distribution model of the thermostat. Although many DIY users install these thermostats on their own, a user might still want to contact a professional if they aren't sure about wire placement. An optional decorative cover plate helps ensure that a neat and clean installation is achieved.

For wiring, a major benefit of the T6 Z-Wave is that it does not require a "C-Wire" for power. This thermostat can operate using battery power only. This is great for DIY users who don't want to mess with the electrical wiring of their HVAC system. But eliminating the optional C-Wire will prevent other Z-Wave signals from hopping through the T6. Signal hopping can only be achieved if the optional C-Wire is used. Still, the T6 Z-Wave is really the only one of these three thermostats that supports true battery-only operation.

Unlike the T6 Z-Wave, the WIFI version of the T6 will always require a C-Wire connection. This is necessary for facilitating proper communication. As for the T5+, there are certain HVAC systems that will allow the thermostat to operate without a C-Wire. This is done using a "wire-saver" device that is compatible with HVAC systems that have 24VAC power terminals available. But since the the T5+ cannot rely on battery power alone, there are still some HVAC systems where a C-Wire will be needed.

The biggest thing to consider here is the communication method of the thermostats. The T5+ and the T6 Pro WIFI both use WIFI connectivity. The T6 Pro Z-Wave uses Z-Wave Plus connectivity on controllers that support Z-Wave Plus. It can also use standard Z-Wave connectivity with standard Z-Wave controllers. Whether the device uses WIFI or Z-Wave plays the biggest role in determining the compatibility of the device. The WIFI models can be controlled through the Honeywell Home App and through smart platforms like Apple HomeKit, Amazon Alexa and Google Assistant.

One advantage of using Z-Wave connectivity is that the thermostat can be programmed through rules and scenes to shut down the fan when a fire alarm goes off. It can also activate energy saving mode automatically through security actions, such as arming the system in the away mode. Using security triggers on the T5+ or T6 WIFI is only possible if the thermostat is set up with a HomeKit Network that includes a compatible alarm system.

There's actually very little difference between the T5+ and the T6 Pro WIFI. In fact, the differences are more prominent when comparing the T6 Pro WIFI and the T6 Pro Z-Wave. The T5+ is black in color, while both T6 models are white. All three of the thermostats offer a similar UI and overall features. As far as price goes, we cannot speak for the T5+ since we do not offer it on our site. Both versions of the T6 go for $127.99 on the Alarm Grid site at the time of this writing.

As far as choosing between the thermostats, it usually comes down to the T6 Pro WIFI and the T6 Pro Z-Wave. There's very little reason to go with the older T5+ model. You should go with the the T6 Pro WIFI model if your an iOS user and you want to include the thermostat into your HomeKit network. You should go with the T6 Pro Z-Wave if you want to integrate the device into your Z-Wave network and use it with either Total Connect 2.0 or Alarm.com. Most Honeywell Systems will use Total Connect 2.0, while other alarm systems typically use Alarm.com. Although the T6 Pro Z-Wave is manufactured by Honeywell, it will still work with other alarm systems that include a functional Z-Wave controller. This includes systems produced by 2GIG and Qolsys.

Many of the differences between the three thermostats are outlined below: 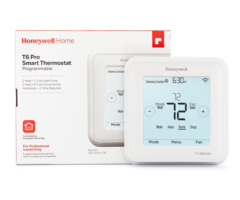