How Do I Check Faulted Zones On My Honeywell Lyric?

You can check faulted zones on your Honeywell Lyric by clicking the Zones button within the Security section on the panel. All of the faulted zones will be displayed on the panel screen. You can also use this section to bypass faulted zones so that you can properly Arm the system. 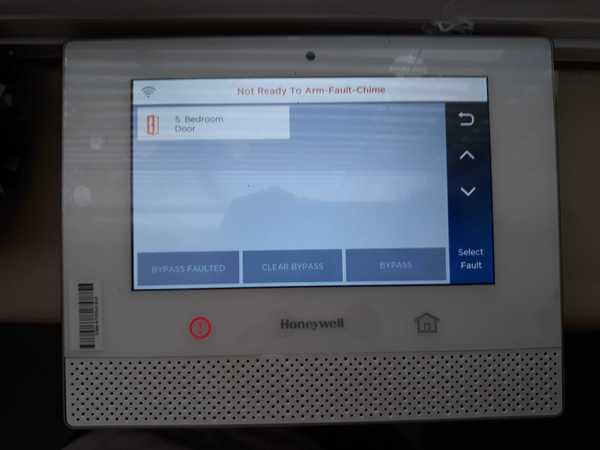 A faulted zone refers to a sensor that is alerting the system to let it know about some activity. The most common type of zone fault you will usually encounter is a door or window that has been left open. You either need to restore the sensor (e.g. close the door) or bypass the zone before you can arm the system. If you bypass the zone, then the system will ignore that sensor and not report any faults for the zone. In other words, activating that zone while the system is armed will not result in any action. The zone is bypassed, and the system knows to ignore it.

Checking the faulted Zones list can be useful, as you might want to go and bypass every faulted zone so that you can arm the system. Another reason might be because you want to check to see if a sensor is working properly. For example, if a door is closed, but the system still shows a fault for the associated sensor, then you know that something is wrong with that sensor. The most likely cause is that the magnet is too far from the sensor, or perhaps the reed switch inside the sensor has become stuck.

Complete the following steps to see faulted zones on the Lyric.

3. Note the faulted zones. Note any faulted zones on the screen. You can also select zones to highlight them and then click the Bypass button to button to bypass those zones.

4. Return to main menu. Press the return arrow in the upper-right corner to exit and return to the main menu.