How Many Repeaters Can I Add to a Honeywell System?

You can add as many repeaters to a Honeywell System as there are wireless zones on the system. However, there is rarely a situation where a user would need more than one wireless repeater. Each wireless sensor can only have its signal repeated once. Also, programming a repeater is optional. 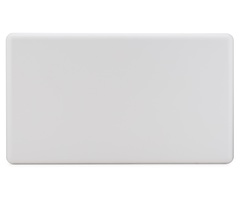 The most popular wireless repeater used with Honeywell Alarm Systems is the Honeywell 5800RP. This device will take the wireless 345 MHz signal sent out from a Honeywell 5800 Series Sensor and send it out a second time. This will effectively double the range of the wireless sensor. So if the sensor had a maximum range of up to 200 feet, then the 5800RP Wireless Repeater can increase the range to a maximum of 400 feet. This is great for larger properties where signals must travel long distances. It is also good for areas where various obstacles like walls and large metal objects disrupt the normal sensor range.

The 5800RP is a plug-and-play device. It does not need to be programmed with the alarm system to operate. Instead, it will start automatically repeating signals as soon as it is powered on. However, a user can program a 5800RP module to one of their system's wireless zones for supervision purposes. The 5800RP uses a plug-in transformer for power. It is also recommended that the user adds a backup battery to keep the device running in the event of an electrical outage.

It is very important to understand that a sensor can only have its wireless signal repeated once. In other words, you can't use a second wireless repeater to further increase the signal range of the sensor. After the first repeated signal, the transmission must reach the alarm control panel, or else it will become lost. For that reason, most alarm systems that require a repeater will only use one.

However, it is possible to use two or more wireless repeaters in different directions so that they can repeat sensor communication signals that come from different locations. This is only used for installations that require the furtherest range possible. Keep in mind that the alarm control panel will need to be in the center of the security system for this to work properly. While it's extremely uncommon, a user might have four wireless repeaters extending out and away from the panel in its own direction to repeat signals traveling from those locations. Again, most users will be perfectly content with just one repeater, and many users won't even need that.