Should I Use Fire With Verification?

When a fire zone is set for Fire With Verification, the smoke detector must be activated twice within a short period of time for a fire alarm to occur on the system. The purpose of this setting is to prevent false alarms. For example, if you are cooking some food or someone is smoking a cigarette, then it's possible that the smoke detector might get activated accidentally. By requiring multiple activations, it is much less likely that one of these occurrences will take place. Alternatively, you might also consider using standalone heat detectors in the areas where false alarms are more likely to occur.

But while Fire With Verification might prevent some false alarms, we generally do not recommend using this Response Type. This is because requiring a second activation for a smoke detector will make it take longer for a fire alarm to occur. As a a result, you will get a slower response from a the local fire department if you have central station monitoring. Likewise, it will take longer for you to get an alert about a fire if you have self-monitoring. For that reason, you want to use Fire W/O Verification or Fire No Verification whenever possible. 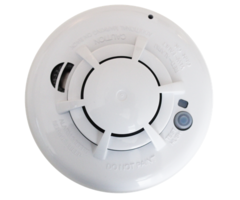