What are the Power Supplies for the Qolsys IQ Panel 2 Plus?

As mentioned earlier, the system comes with a 6 foot long power cable. This cable is already pre-prepared, and no cutting or splicing is needed. One end of this prepared cable has spade connectors for connecting to the transformer. You will need a Phillips head screwdriver to do this. Since DC power is being used, polarity matters. The positive (+) wire features grey dashes, and it may be marked red at the end. The negative (-) wire will not have an dashes, and it may be marked black at the end. The opposite end of this included prepared wire will have a male barrel connector for easily connecting to the IQ Panel 2 Plus System.

There are actually two (2) locations on the back of the IQ Panel 2 where you can connect primary transformer power. If you are using the prepared 6 foot cable that came with the panel, then you will be using the barrel connector. But if you are using any other cable, then you will be using the red and black wire ports, which are located directly next to the barrel connector. The red wire port is for positive (+), and the black wire port is for negative (-). 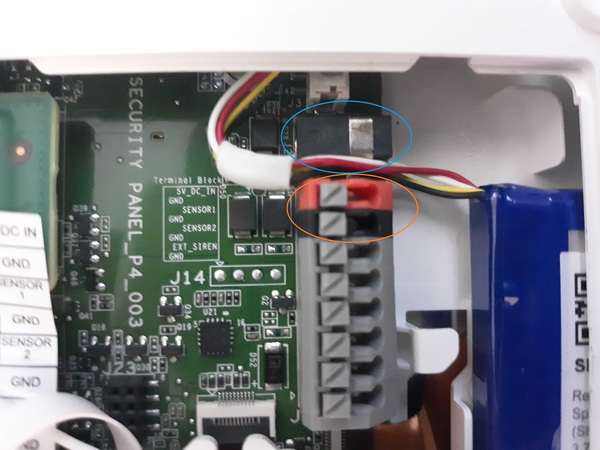 If you ever need to replace the cable for your IQ Panel 2 Plus System, we recommend using a Honeywell LT-Cable. This is an 8 foot long prepared cable that requires no splicing or cutting. The longer end features spade connectors for connecting to the transformer, while the shorter end features stripped wires for plugging into the red and black ports on the back of the IQ Panel 2. The two ends meet with a male-female barrel connection. Unplugging this connection is convenient if you ever need to cut power to the system.

For backup power, the Qolsys IQ Panel 2 Plus uses the Qolsys IQ2 Battery. This is also known as part number QR0041-840. This battery keeps the system running in the event that transformer power is lost. The battery has specifications of 3.7V, 3200mAh, 11.8Wh. It connects with the back of the panel using a 4-pin connection. Over time, the battery will very slowly lose its ability to store a charge, and it will eventually need to be replaced. Make sure to power the system completely down before attempting to replace the battery.