Why are the Disarm Photos so Dark on My Qolsys IQ Panel 2 Plus?

The disarm photos are so dark on your Qolsys IQ Panel 2 Plus because a piece of blue plastic film is covering the front camera lens on the system. The plastic film should have been removed during the manufacturing process, but it was left on by mistake. Removing the film can fix the problem. 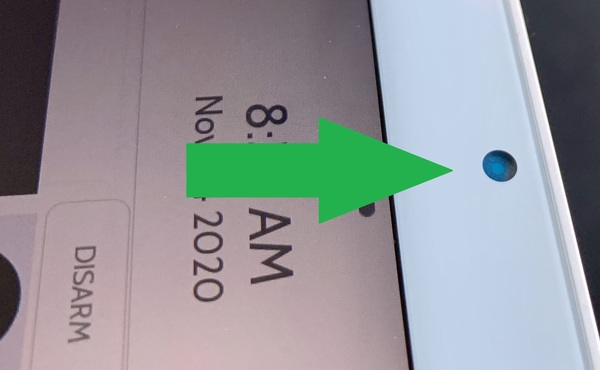 The Qolsys IQ Panel 2 Plus has a front camera that is used for disarm photos. You can configure a system setting to have this camera produce an image when the system is disarmed. It is also possible to have a photo taken when system settings are accessed and/or when the system goes into alarm. You can review these images to see who was using the system. Checking the images is a great way to make sure that no unauthorized users were operating the system. These images are also used in conjunction with the facial recognition feature for Alarm.com. You can configure the Camera Settings for your IQ Panel 2 by clicking the small grey bar at the top of the main panel screen, and choosing Settings > Advanced Settings > Installer Code (default 1111) > Installation > Camera Settings.

Just like any other electronic consumer product, the Qolsys IQ Panel 2 Plus is made up of many small parts and pieces that come together to form a complete machine. One such piece on the IQ Panel 2 is its front camera. This camera originally has a piece of semi-transparent plastic film covering its lens. The plastic film is designed to protect the lens against damage while the camera is being installed inside the system. It is supposed to be removed during the manufacturing process, and the user should not see it in the final product. But if there is a mistake in manufacturing, then the plastic film might be accidentally left on and still covering the camera lens. If the user doesn't remove it, then they will most likely find that their system disarm photos are too dark and not useful for identifying individuals. 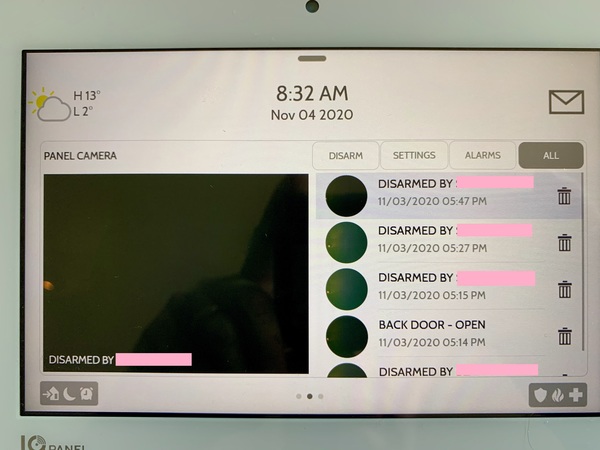 Fortunately, you can easily remove the plastic film yourself and fix the issue. First, press in the bottom two (2) panel tabs, and open up the system. Then identify the camera at the top of the panel. When you look at the camera from the inside of the panel, you are looking at its back, which is the opposite end from the lens. Normally, you cannot see this part of the camera when the panel is closed. Look for the small black square with the orange connector coming from it. Use your finger to gently pull the camera from its slot so that you can access its front. Very carefully remove the piece of blue semi-transparent plastic film that is covering up the lens. Then carefully put the camera back into its slot so that it remains securely in place. Make sure to not touch the camera lens when doing this. There should be a soft "click" as the camera is re-secured in its proper position. You can then properly close the IQ Panel 2 Plus like normal. 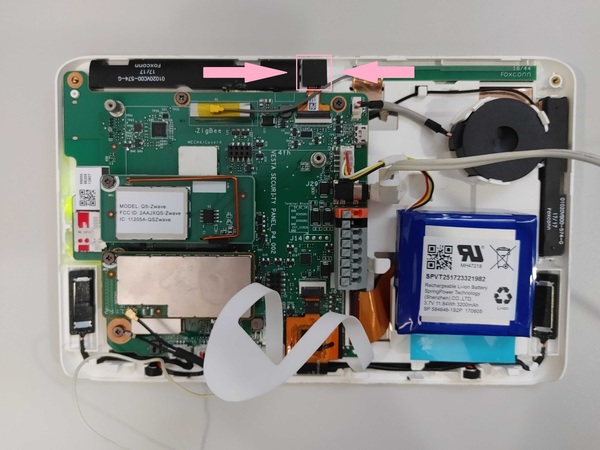 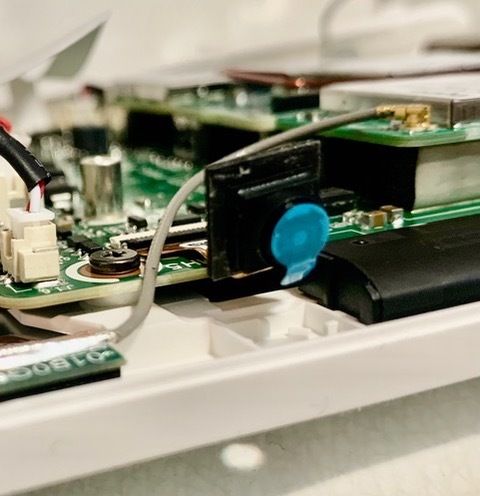 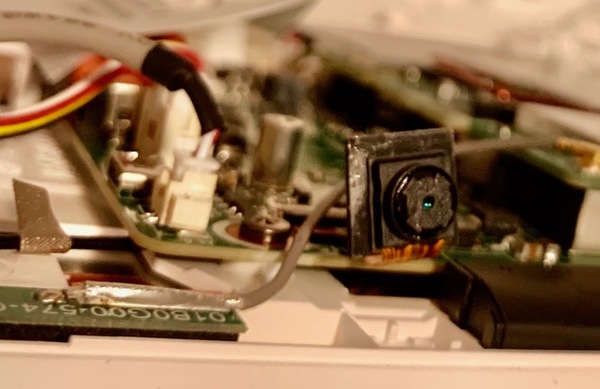