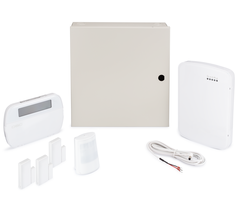 The DSC NEO-2128-PK-ENC-VZ is a system kit based around the 128-zone DSC HS2128NK PowerSeries NEO Panel. It also features a keypad with built-in PowerG Transceiver, an Alarm.com Dual-Path Verizon LTE & IP Communicator, 3 PowerG Contacts, a PowerG Motion and an LT-Cable. Buy the NEO Kit here.

The DSC HS2128NK PowerSeries NEO is great for large homes and businesses that need support for a lot of zones. This is a very powerful system, and it offers some impressive features. Honestly, it might be a little much for the average homeowner. But is an excellent system to choose if the requirements warrant it. Although the system is capable of supporting up to 128 zones, it can only support eight (8) hardwired zones right out of the box. This is because it only has enough on-board terminals for eight (8) hardwired zones. If you want to use additional hardwired zones, then you will need one or more DSC HSM2108 Expansion Modules. Each of these modules allows you to use eight (8) additional hardwired zones with the system.

Luckily, you are not restricted to just hardwired sensors with this system. The DSC HS2LCDRF9 N NEO Keypad included with this kit features a built-in PowerG Transceiver. This will allow you to start adding PowerG Sensors. PowerG Sensors are highly respected in the security industry for their 2km wireless range in open air and for their 128-bit AES encryption. This kit also includes three (3) DSC PG9303 Door/Window Contacts and one (1) DSC PG9914 Motion Detecting Sensor so that you can try out PowerG Sensors for yourself. Just remember that PowerG Sensors also count toward the panel's 128-zone limit.

Also included with this kit is a fantastic dual-path communicator. The DSC TL880LTVZ N is a dual-path communicator that connects with the Alarm.com servers across the Verizon LTE Network and through a wired ethernet connection for internet service. The communicator will send out signals across both paths, and whichever one goes through first will be accepted. It is important to remember that Alarm.com requires the activation of the cellular communicator. As a result, you will need an alarm monitoring plan that includes both cellular service and access to Alarm.com. If you want monitoring service from Alarm Grid, you can choose between our Gold and Platinum level plans. Activating this communicator for monitoring will allow you to use the Alarm.com platform for security and automation control. You can conveniently access Alarm.com through the website or mobile app. As an added bonus, the communicator doubles as a Z-Wave Plus controller. This means that you can start building a complete Z-Wave network for use with Alarm.com

We have also bundled an LT-Cable with this kit. The LT-Cable makes connecting the system with a compatible transformer (not included) super easy. But remember, you will still need to get a backup battery for the system, as one is not included with this kit. If you don't plan on using too many sensors with the system, then an UltraTech 1240 will probably suffice. But if you really expand upon the HS2128NK and use it to its full potential, then you might need something stronger, like the UltraTech 1270. Some users may need something even more powerful than that. If that is the case, please reach out to us, and we will be happy to help you choose the right equipment.