Why Does My Battery-Powered Z-Wave Device Quickly Drain Batteries? 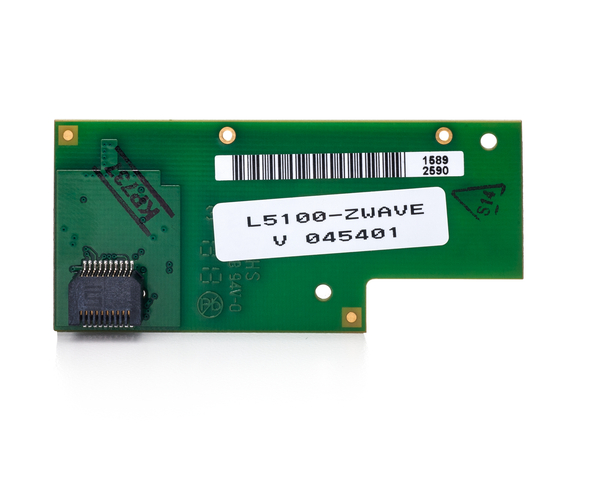 Typically, Z-Wave devices work to conserve batteries as much as possible. But there have been some irregularities where certain Z-Wave controllers (often older models) cause issues that result in Z-Wave devices communicating excessively with the main hub. On the surface, everything looks fine. The Z-Wave device is working, and the hub is able to successfully control it. But in reality, invisible signals are constantly being sent from the device to the hub, and it is causing the device batteries to drain too quickly. Checking the diagnostics within advanced Z-Wave programming may help you identify this issue.

One such case where this issue occurred was with the old version of the Honeywell L5100-ZWAVE. Resideo (then known as Honeywell) released this device in 2012 to give automation capabilities to their wireless LYNX Touch Security Systems. The original model was known as Version 045401, which can be seen in the picture above. While this older model usually works quite well, it has been known to cause a beaming issue with Z-Wave locks and other battery powered Z-Wave devices. This issue caused the L5100-ZWAVE to send out multiple "generic" beaming signals, which in turn caused battery powered devices such as locks to constantly "wake up", thereby draining the batteries. The issue was addressed when Honeywell released Version 045500 of the Honeywell L5100-ZWAVE.

If you have a Honeywell LYNX Touch System with a Honeywell L5100-ZWAVE that is supporting one or more Z-Wave locks or other battery powered Z-Wave devices, and you find that the batteries are draining quickly, then it is a good bet that you have an older version of the Honeywell L5100-ZWAVE. Unfortunately, there is no easy way to fix this, other than simply replacing the module. You can certainly buy a new L5100-ZWAVE module from us and use it to replace your old one. Any Honeywell L5100-ZWAVE purchased on our website will be the newer 045500 Version. The other option is to continue to replace batteries in devices as they go low. Over time, the cheaper option is to replace the Z-Wave module. If you aren't sure which version of the L5100-ZWAVE you have, you can check the sticker, as shown in the picture above, or check the product's packaging. Remember, 045401 identifies the old model (2012), while 045500 identifies the new model (2018).

Aside from draining the batteries quickly in battery powered Z-Wave devices, having the original version of the L5100-ZWAVE may cause other types of issues with Z-Wave automation devices. These issues can include devices that work fine for a while then stop, of devices that seemingly work fine, but then stop working when a new device is added to the Z-Wave network. Bottom line, if you have an L5100-ZWAVE that was installed prior to 2018, and you have seemingly inexplicable Z-Wave issues, then there is a good chance that an update to the Z-Wave module is in order.

Click Here to Learn More
Julia Ross
October 12, 2020 22:51
Are you using the encrypted devices? If so, be sure you are using the proper equipment code for the sensor. If not, it will learn in, but will not work properly and will eventually come up in supervision trouble: https://www.alarmgrid.com/faq/why-am-i-getting-supervision-trouble-on-my-2gig-eseries-sensor
Darryl Fields
October 11, 2020 02:11
I purchased the 2gig-gc3e series panel. I’m in the process of programming panel, and the problem I’m incurring is the panel want annunciate/chime when sensors are activated. I have went through each sensor setting and have chosen voice descriptor, and have also enable each of them to chime.Here’s the kicker, when I do the sensor test mode, all of them will chime and or Announce what I programmed. I have done soft and hard system reset. I’ve been through program at lease three times alone with reading through all 91pages of installer manual. Denote: When system is armed, none of the sensors will cause an alarm. Please tell me this is not the first encounter. Is it possible that one of the Circuit board is defective ? I need help with this one.
Julia Ross
April 30, 2020 23:00
Hi Brett, yes, you would have to re-program all the Automation devices that had been programmed into the original controller.
Brett Latimer
April 30, 2020 20:10
If I choose replace This device with a newer version, will I have to reprogram all home automation devices?