Will 2GIG Sensors Work On a Qolsys IQ Panel 2?

If it is absolutely necessary that 2GIG Sensors are used, there are a couple of options. There are third party converters that can take the 345 MHz signal used by 2GIG Sensors and adjust them so that they operate at the 319.5 MHz frequency. This will make these sensors compatible with the standard wireless receiver for the IQ Panel 2. One such converter for this job is the Resolution Products RE524X.

Finally, Qolsys has stated that they plan on releasing a 345 MHz daughterboard for the IQ Panel 2 sometime in late 2018. This board can replace the standard one that supports 319.5 MHz sensors. By doing this, 2GIG and Honeywell 5800 Series Sensors will be supported by the IQ Panel 2. However, there is one very important consideration to make when doing this. Since the 319.5 MHz board will be taken out, the panel will no longer be able to support the 319.5 MHz sensors. Thus, the user must essentially choose between support for 319.5 MHz Qolsys and Interlogix sensors, or 345 MHz Honeywell and 2GIG sensors. 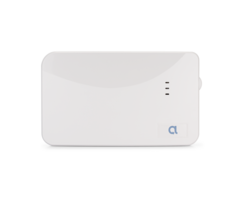