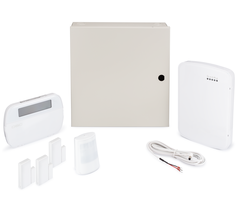 The DSC HS2016NK 16-Zone PowerSeries NEO is a very powerful hardwired alarm system. With support for just 16 zones, this panel is best used in smaller homes and businesses only. Also note that there are only six (6) hardwired zone terminals built into the board. You will need to add a DSC HSM2108 Expansion Module if you want to use 16 hardwired zones with the system. Or you can just use wireless PowerG Sensors instead.

We added a DSC HS2LCDRF9 N NEO Keypad with this bundled kit. This keypad includes a built-in PowerG Transceiver for supporting wireless PowerG Sensors. This means you can readily add PowerG Sensors with the system once the keypad is installed and programmed. Just remember that the HS2016NK System only has 16 zones available. Both hardwired sensors and PowerG Sensors will count towards this limit.

There is also a DSC TL880LEAT N AT&T LTE & IP Communicator included with this kit. This communicator will connect the panel with the Alarm.com servers for monitoring service. You will also need a monitoring plan that includes access to ADC. There is also a built-in Z-Wave Plus controller inside communicator. This will allow you to start building a smart home automation network around the system. All programmed Z-Wave devices will need to be controlled from Alarm.com, as the panel does not offer a method for on-site Z-Wave control.

The DSC PG9303 Door and Window Contact is a surface-mounted sensor that lets the system know when a door or window has been opened. The DSC PG9914 Motion Sensor looks for changes in IR energy caused by movement. It alerts the system upon detecting any activity. All PowerG Sensors can communicate with the DSC HS2LCDRF9 Keypad from up to 2km away with direct line of sight. These sensors also use 128-bit AES encryption for enhanced wireless security.

We have also bundled a Honeywell LT-Cable with this kit for easily connecting the panel with the transformer (not included). You will still need to add a backup battery to the system. This will prevent any low-battery trouble conditions, and it will keep the system powered on when the electricity goes out. Many users will use the UltraTech 1240 for this purpose. But you might need a battery with a higher power rating if you find that your panel requires additional power. You can purchase an UltraTech 1270 if that is the case. The typical battery has an average lifespan of three (3) to five (5) years.