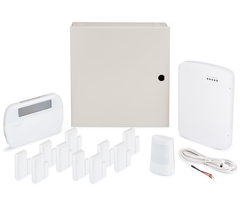 The NEO-2016-PK-ENC-AT is a 10-1 system kit. It is a great starter pack for those interested in alarm monitoring. It includes a 16-zone NEO System, a dual-path AT&T LTE and IP communicator, a keypad w/ built-in wireless transceiver, 10 contacts, a motion, and an LT-Cable. Buy the kit here.

The DSC HS2016NK is the 16-zone version of the DSC PowerSeries NEO. It provides some of the best functionality you will find in a hardwired alarm system. Just note that this version only supports 16 zones. You may want to get the 64-zone model or the 128-zone model if you plan on adding a large number of sensors. And while the system can support 16 zones, it only has six (6) hardwired terminals available. You must add a DSC HSM2108 Expansion Module if you want to use additional hardwired zones.

The included DSC HS2LCDRF9 N NEO Keypad is an extremely important accessory to this system. Not only is this keypad used to operate the system, it also includes a built-in PowerG Transceiver. This means that you will be able to start adding PowerG Sensors to the system as well. Just keep in mind that you are restricted to only 16 zones. This limit affects both hardwired sensors and wireless PowerG Sensors. The keypad itself works great for arming, disarming, programming, and checking current system status.

We have also bundled a DSC TL880LEAT N AT&T & IP Dual-Path Communicator with this kit. This is important for getting the system connected with Alarm.com. Remember that you will need a monitoring plan that includes access to the ADC service. You can access Alarm.com remotely from your Android or iOS device. This is great for arming/disarming, checking current status, controlling Z-Wave devices, viewing ADC Cameras, and more. This communicator also includes a built-in Z-Wave controller, allowing you to enroll Z-Wave devices for use with ADC.

There are also some PowerG Sensors included with this kit. You get ten (10) DSC PG9303 Contacts, which are perfect for monitoring doors and windows. You also get a single DSC PG9914 Motion Sensor, which will detect movement by looking for changes in infrared (IR) energy. These sensors will alert the system whenever there is any activity. As PowerG Sensors, they can communicate with the DSC HS2LCDRF9 Keypad from up to 2km away with direct line of sight. They also use 128-bit AES encryption, which makes them nearly impossible to hack or takeover wirelessly.

Also included in the kit is a Honeywell LT-Cable. This will make it easy to connect the system with a compatible transformer (not included). However, a backup battery is not included with this kit. You will need to add one separately. A good backup battery for the job is usually the UltraTech 1240, which can be purchased here. We also offer the UltraTech 1270, which has a higher power rating. Keep in mind that any battery will need to be replaced every three (3) to five (5) years.